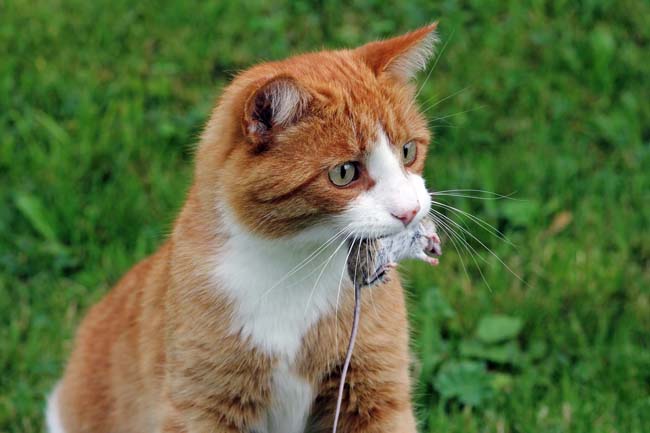 Yersinia Pestis is the bacteria responsible for the black death which killed millions of people in Europe from 1346. There are several modes of transmission of this highly infective zoonotic bacteria including flea bites, coughing and sneezing (pneumonic plague) and eating an infected animal.

Diagnosis: Cultures from tissue and fluid samples can confirm the diagnosis.

Also known as rabbit fever, tularemia is a rare bacterial infection caused by Francisella tularensis which can infect more than 100 species of mammal (including humans). Cats contract the disease in several ways including eating animals (rodents or rabbits) infected with tularemia.

The incubation period is 1-10 days, and symptoms vary depending on the route of exposure and the strain but may include:

Diagnosis: A culture of a tissue sample, serology to look for antibodies in the blood or polymerase chain reaction can diagnose tularemia.

Treatment: Antibiotics for 14 days, gentamicin, streptomycin, and tetracycline are all effective.

This bacterial infection caused by Mycobacterium tuberculosis which was a huge scourge on humanity until the advent of antibiotics. Even today, 1.5 million people worldwide die from the disease. Tuberculosis (TB) is rare in cats as they seem to have a natural immunity to it. Cats become infected during hunting if they are bitten by an infected animal (usually a rodent) or consuming food or milk which is infected with the bacteria. Symptoms vary depending on the route of infection.

For cats who have been bitten, lesions appear on the area that was bitten, which is usually around the face and neck. Swollen lymph nodes can also develop.

Cats who have acquired infection via consuming food or milk containing the bacteria, gastrointestinal symptoms are more frequent including:

Diagnosis: Can be difficult, biopsy samples can be invasive on an already sick cat, culture, and cytology of discharges (if present), other tests may include a chest x-ray and standard blood and urine tests.

Treatment: Euthanasia is recommended that cats with TB as treatment can be difficult and there is a high risk of the infection spreading to household members and the wider population.

Caused by a common bacteria known as Salmonella which infects a huge number of species including humans, domestic pets, wild animals and farm animals. Vomiting and diarrhea are the most common symptoms. Cats contract the disease from exposure to contaminated food, infected prey or fomites (objects such as food bowls).

Diagnosis: Bacterial culture from rectal swabs or blood samples can confirm a diagnosis.

Treatment: Supportive care such as fluid and nutritional support.

A rare but highly lethal viral infection caused by a herpes virus known as Su-HV1. The primary mode of transmission is from contact with infected pigs; however, it is also possible for cats to become infected after consuming infected rodents.

Diagnosis: Serologic testing to look for antibodies in the blood or tissue samples at necropsy can confirm the diagnosis.

Treatment: There is no treatment for pseudorabies other than supportive care.

There are three phases, prodromal, furious and dumb/paralytic all with different symptoms. Malaise, low-grade fever and loss of appetite are common symptoms during the prodromal phase. Furious is just that, the cat acts aggressively, muscle tremors and incoordination are also present. The final stage is dumb/paralytic whereas the name would suggest, the cat develops paralysis of the throat and hind legs, respiratory failure, and coma.

Diagnosis: The only definitive way to diagnose rabies is a post-mortem examination of the brain.

Treatment: There is no treatment for rabies in cats; euthanasia is necessary and local authorities notified.

Australia and Antarctica are the only continents which don’t have rabies, and the United Kingdom is also rabies-free.

Add to that the risk of injury from an animal while hunting. Possums, snakes, large birds can all cause serious injury or death to a cat.