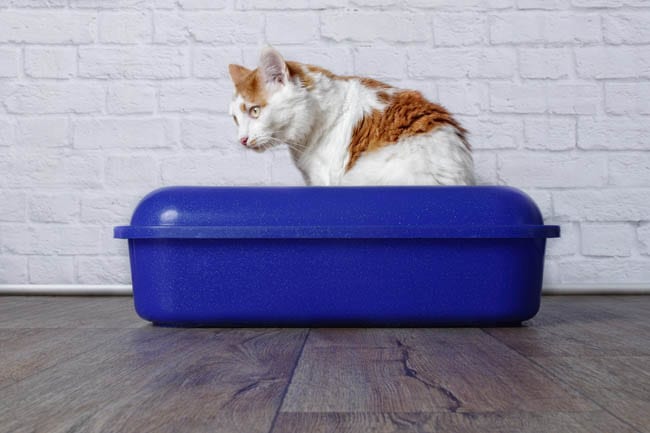 Cats are clean animals by nature, so when a cat starts urinating outside the litter box (medically known as periuria), this is usually a sign that there is something wrong with either the cat or the litter box. There are two types of periuria, marking (which is the marking of vertical objects such as walls and doors) and latrine behaviour (urinating outside the litter tray). This article focuses on latrine behaviour.

The first thing you should do is take your cat to the veterinarian to rule out a physical problem such as feline diabetes, FLUTD and old age. Has this behaviour started suddenly? Have you noticed any other changes such as crying in the litter tray, going to the toilet more, hiding, increased thirst?

Once the physical is ruled out then it’s time to look at what is causing your cat to urinate outside of the litter tray.

Causes of inappropriate urination in cats

There are several issues which can stem around litter trays resulting in inappropriate urination.

Remember that a cat’s sense of smell is about one thousand times greater than our own. Cats will not want to go near a litter box that smells offensive any more than we would want to use a filthy toilet. The litter box should be scooped out at least once a day and cleaned with soap and hot water at least once a week for a house with one cat.

Do not use strong-smelling detergents or cat litter that may be too harsh on a cat’s nose. Rinsing with a solution of one part bleach to ten parts water followed by air drying will help kill odour causing bacteria.

Houses with multiple cats should have multiple litter boxes. A general rule of thumb is one litter tray per cat and one for the house.

Placement of the litter tray is also important. Just as humans like privacy, so do cats. Placing the litter tray in high-traffic may result in your cat’s refusal to use the litter tray. While privacy is good, cats don’t like to feel cornered in their litter tray and like to have an escape route (from another cat, dog, toddler).

The same also goes for placing a tray in an area your cat feels unsafe walking to, such as having to pass the sleeping spot of the family dog who ambushes your cat.

Another thing to remember is that cats do not like to go to the toilet near where they eat. So make sure the litter box is placed far from your cat’s food and water.

If you live in a multi-story home, don’t put your cat’s tray in the basement if he spends most of his time on the second floor. As a guide, you should have a litter tray on each level of the home.

Also, some cats will enjoy the privacy of a fully covered litter tray, while this may be too confining for other cats. Generally, I prefer to have a combination of both trays to suit my cat’s different preferences.

The size of the litter tray may also be an issue. Kittens and older, arthritic cats will have problems climbing into a tray with high sides for example. I prefer to start out with a small tray for kittens and move up to a larger/high-sided tray once they are an adult.

Stress is another major cause of inappropriate urination in cats. Factors causing stress in cats include:

Helping your cat overcome these stresses may well result in the inappropriate urination stopping, however, this isn’t always the case. Sometimes the behaviour can become so ingrained in the cat that even once the stress has been removed, the behaviour continues. If this is the case it is a good idea to seek advice from your veterinarian as to how to re-train your cat.

Some cat owners have had great success using Rescue Remedy on their cats, although this isn’t advisable until you have spoken to your veterinarian.

Of course, there are other reasons that a cat may urinate in an improper place. Spraying when a cat sprays urine on a vertical surface, is a way that cats communicate with other cats. What they are essentially doing is marking their territory. Therefore it is very important to clean these marked areas properly with an enzymatic cleaner that will remove every trace of urine scent (see our article on removing cat urine odours).

Cats will continue to spray over areas that have already been marked with urine. This marking behaviour is found most common in male cats, although female cats have been known to spray also. Neutering your cat should greatly reduce the spraying problem. You may also want to use a spray-on cat repellent in the areas most frequently marked by your cat.

Declawing sometimes leads to refusal to use a litter box. Often the cat’s paws are tender and scratching around in cat litter can lead to pain and discomfort. In this case, it is advisable to find a softer litter which is less harsh on your cat’s feet.

There are several conditions that can lead to inappropriate urination in cats. These include:

How to deal with a cat urinating inappropriately

If you do catch your cat urinating in an inappropriate spot quickly move the cat and gently place him in the litter tray. Never use physical punishment on your cat, this will make your cat afraid of you and may well make the behaviour worse as it will stress the cat further.

Confining your cat to a small room such as the laundry can often in the short term. Once your cat is using the litter tray, gradually increase the area.

So, if you have two cats, you should have three trays. Although understandably not every home can accommodate lots of trays. If you are limited in how many trays you can have, make sure you remove solids and urine several times a day, and fully empty/disinfect at least once a week.

Please bear in mind that as the cat ages the frequency of inappropriate urination may increase. Poor eyesight, dementia and incontinence may also be contributing factors. Always seek advice from your veterinarian on these matters as he/she will be able to best advise you on how to help your cat in old age.