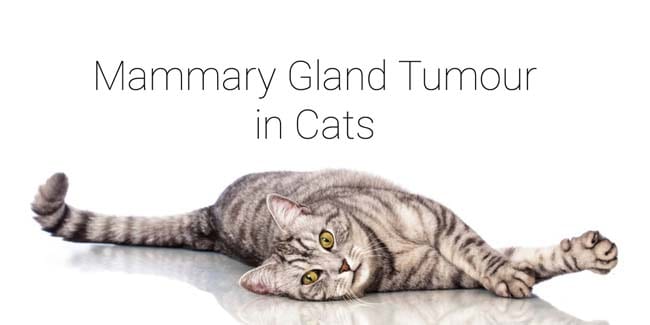 Mammary cancer affects mostly female cats, but can also occur in males, affecting less than 1% of cases. The underlying cause is not known, hormone birth control in unspayed females has been found to triple the risk of mammary cancer. There is a seven-fold increased risk in unspayed cats. Genetics can also be a factor, domestic shorthairs and Siamese cats have increased risk of developing mammary gland tumours, and at a younger age.

Fifty per cent of cats have tumours in multiple glands. Metastasis (spread of the tumour) is common and will often involve regional lymph nodes, lungs, and the liver.

Your veterinarian will perform a complete physical examination, including carefully examining the mass and palpitating the regional lymph nodes to determine if the tumour has spread. A thorough history is important including:

A modified WHO staging system is used to stage feline mammary tumours, which is based on the T (tumour size), N (lymph node status), and M (metastasis) system. See Table 1.

Staging is the evaluation of the extent of cancer, to determine how large it is, and if it has spread to the lymph nodes and beyond.

The veterinarian may refer your cat to a board-certified veterinary surgeon or veterinary oncologist for specialist treatment. As 80-90% of mammary gland tumours are malignant, surgical excision and histopathology (examination of the removed tissue) are the procedure of choice.

Chemotherapy with doxorubicin and cyclophosphamide or carboplatin will be necessary if the cancer has metastasised or is inoperable.

Prognosis depends on the size of the tumour, early diagnosis and aggressive surgery has a better prognosis.

The best way to reduce a cat’s chances of developing mammary glands is to spay or neuter it. One study found that spaying cats before six months reduce the incidence of mammary cancer by 91 percent, and 85 percent for cats spayed before one year of age.

Perform monthly checks on your cat (male and female); this should include evaluation of the mammary glands to feel and feel for changes which include lumps and/or areas of ulceration. See your veterinarian immediately if you notice any changes.