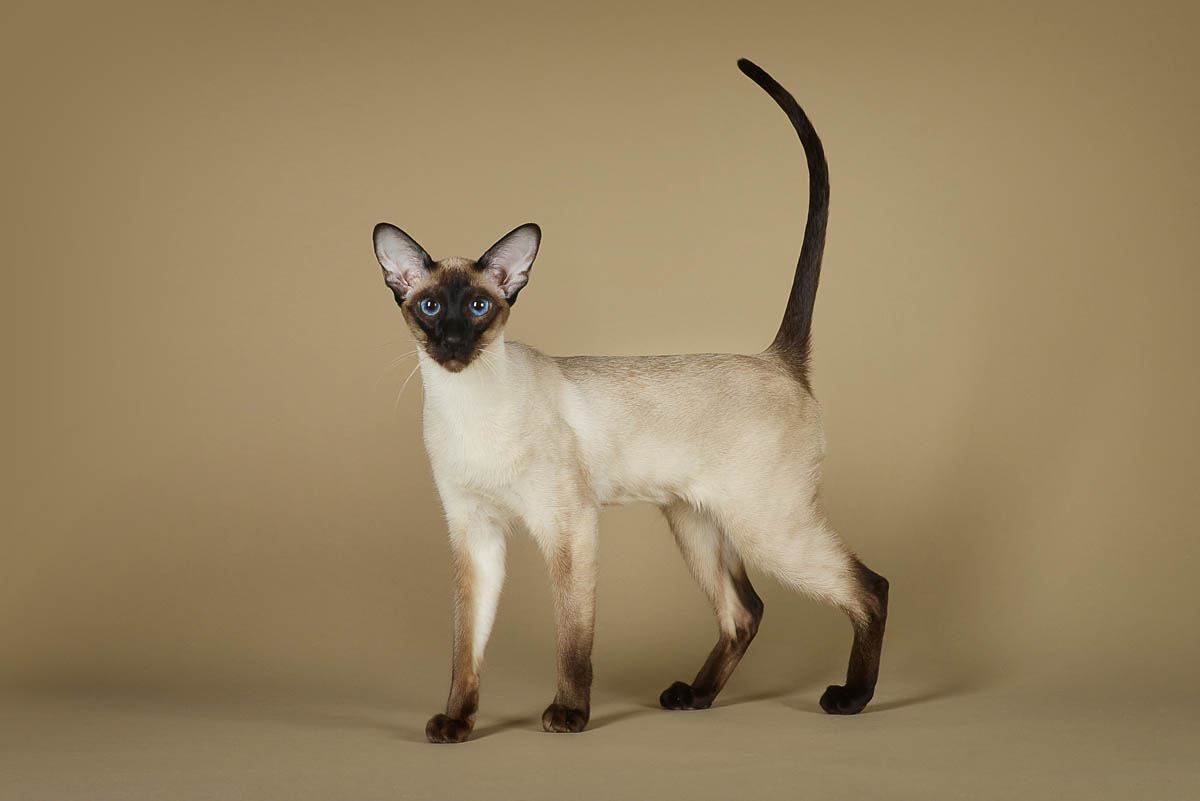 The first cat show was held at Crystal Palace, London in July 1871, which included two Siamese cats owned by Mr Maxwell. One journalist describes them as “…soft, fawn-coloured creatures, with jet-black legs – an unnatural, nightmare kind of cat, singular and elegant in their smooth skins, and ears tipped with black, and blue eyes with red pupils.” There is little information on Mr Maxwell or the origins of these Siamese cats.

In 1884 Mr Edward Blencowe Gould an Acting Vice-Consul at Bangkok obtained a breeding pair of Siamese cats called Pho and Mia. It is said that King Chulalongkorn gave them to him, although this story does attract some scepticism. What we do know is that two Siamese cats arrived in England from Bangkok by Mr Gould as a present to his sister, Mrs Lilian Veley. Pho and Mia are recorded as 1a and 2a in the Siamese Cat Register. Mrs Veley went on to co-found the Siamese Cat Club in 1901.

During the next few years, more Siamese cats were imported into Britain and are the foundation cats of the Siamese we know and love now.

The Siamese is an extremely intelligent, loyal and affectionate cat who forms close bonds with its human family. They are often described as ‘dog-like‘ in that they enjoy playing fetch.

Siamese cats need to be with their human companions almost constantly and do not do well on their own. They often form a close bond with one particular member of the household, sometimes at the exclusion of others.

One of the most talkative cat breeds, the Siamese love to give their human companions a running commentary with their unique, deep and loud meow.

Body: The Siamese is a medium-sized, elegant animal with a long, muscular and tubular body and a long neck. Legs are long and slender with small, oval feet. Hind legs are longer than the front legs. The tail is long, thin and whip-like.

Head: The head is a long, tapering wedge that flares out in a straight line to the tip of the large ears. The nose is long and straight with no break. Eyes are almond-shaped, and slant towards the nose. All Siamese have blue eyes.

Coat: The Siamese coat pattern is striking. The face, paws, ears, and tail (points) have a darker colouring; the body is light in colour. The coat should be short, fine and silky to the touch.

The changing appearance of Siamese cats

Siamese cats have changed quite a lot in the past three decades and have become much more slender than their ancestors. Originally there were two Siamese types, the applehead and the classic. The classic Siamese is more somewhere between the applehead and modern but has been around as long as Siamese have. Over time, the Siamese body and head became more slender (wedge-shaped).

Below is a photo of our tabby point Siamese from the late 1970s. You can see their face shape is different to the modern Siamese of today.

Some breeders continue to breed the old-style Siamese under the name Traditional, Thai, Applehead or Old Style Siamese. But cats on the show bench are usually fit the ‘modern’ standard, pet Siamese may be less slender in the face.

The Cat Fanciers Association only accepts the traditional colours listed above, and other colours go under the classification of colourpoint shorthair.

Other cat associations accept different Siamese colours in addition to seal, blue, chocolate and lilac, which include:

These colours can also occur in tabby point (also known as lynx) and tortie point.

Siamese should be bought from a registered cat breeder to ensure you are getting what you are paying for. Registered breeders have to abide by a code of ethics set out by their registering body. I always prefer to buy purebred cats from a breeder who raises the kittens underfoot, which means they grew up inside the home and are used to the hustle and bustle of a household.

Kittens should not leave the breeder until they are at least 12 weeks old, by which time they will have received at least two of the required three F3 vaccinations. Some breeders also choose to desex (spay or neuter) their kittens before they go to their new homes. All cats sold or given away in New South Wales must be microchipped.

Write a list of questions for the breeder before you visit the cattery and always get guarantees in writing. If you pay cash (and I don’t recommend it), insist on a receipt.

The Siamese cat’s coat is low maintenance, groom once a week to remove loose hairs. Trim the claws every 4-6 weeks.

Do not let your Siamese cat roam free; there are too many dangers out there. If possible, give him access to a cat enclosure that keeps him safe, but allows him to enjoy the outdoors.

All cats, purebred or mixed breed can be prone to specific health problems, Siamese may have a higher incidence of the following:

Breeders have worked hard to eliminate inherited diseases in Siamese cats, and early spaying greatly reduces the risk of mammary cancer. Strabismus and kinked tails have largely been bred out.

Who are Siamese cats suited to?

A Siamese will often form a strong bond with one member of the household, and can sometimes become quite jealous. If you want a constant companion who will follow you around, conversing with you, then the Siamese is for you. If you prefer a quieter and more hands-off cat, then another breed may be more suitable. Siamese cats do like to be the king or queen of their domain. 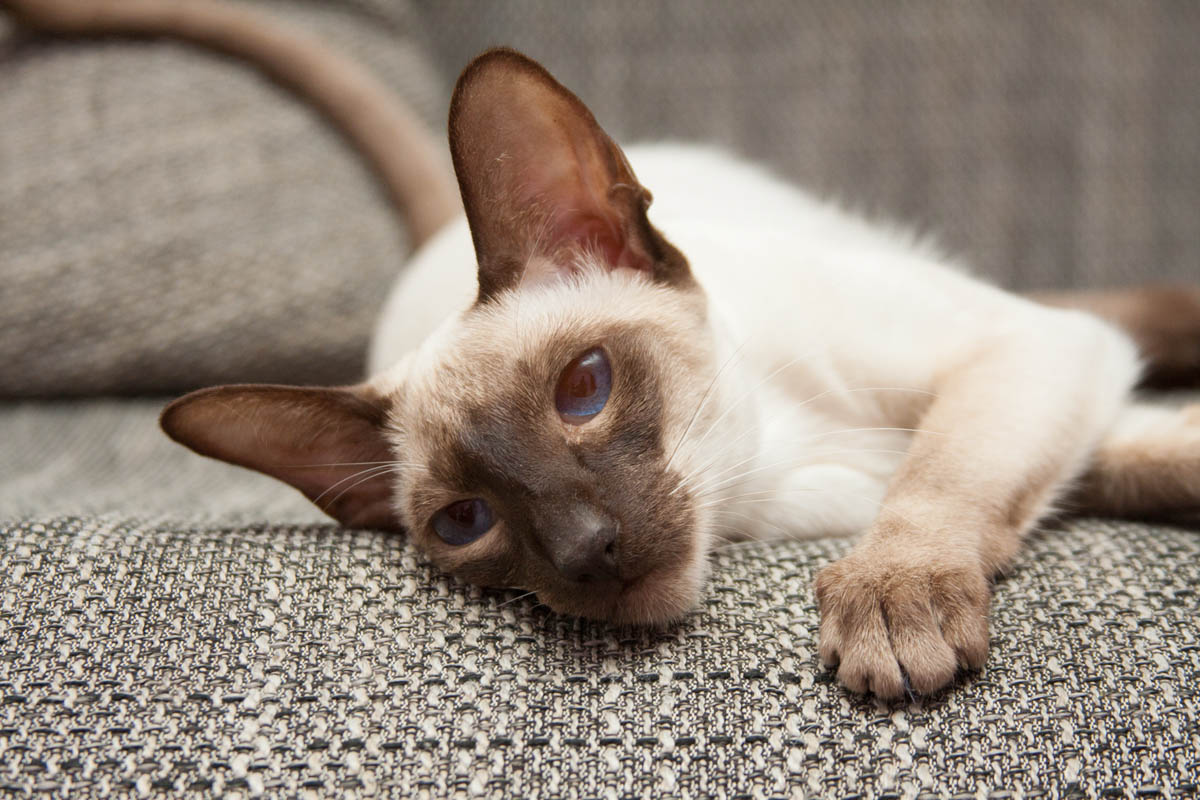 Do Siamese cats shed a lot?

All cats shed, the Siamese sheds less than other breeds.

Siamese cats originated from Thailand, which was formerly known as Siam.

Siamese cats typically bond with one person in the family and display jealousy towards other family members.

Siamese cats are one of the most intelligent cat breeds.

Is there a hairless Siamese cat?

The Peterbald is a cross between an oriental shorthair (a cat with the Siamese body type but non-pointed) and a Don sphynx. The Peterbald occurs in all colours, including pointed.

As far as physical care, the Siamese is no more high maintenance than any other shorthaired breed. A weekly brush is enough to remove loose hairs as well as provide adequate dental care.

The Siamese forms close bonds with their human family, which includes plenty of human interaction and do have higher emotional needs than other breeds.

Siamese cats are extremely vocal and will share their opinion with their human family if it is asked for or not. Most people who choose a Siamese do so knowing that they are adopting a talkative cat.

What is the best food for a Siamese cat?

Once the Siamese kitten has weaned, feed a premium kitten food until adulthood and switch to a premium adult maintenance diet which can include both canned and dry food.

Genetically a Seal Point Siamese cat is a black cat; however, Siamese cats carry the Himalayan gene (known as cs) which has a temperature-sensitive expression. This gene causes partial albinism due to a defective enzyme tyrosinase and is located in the melanocytes which are responsible for controlling the production of melanin, which gives the coat its colour.

Siamese (and other breeds which have the Himalayan gene) have defective tyrosinase which doesn’t function as it should at normal body temperature. This means the cat’s true colour (reflected in the points) is unable to express on warmer parts of the body.

Siamese cats are extremely loyal, affectionate, intelligent, strong-willed and talkative. They make exceptional pets in the right home where they receive the love and attention they crave.

Some Siamese cats can jealous, but they are not mean. This myth stemmed from the movie The Lady and the Tramp which featured two Siamese called Si and Am.