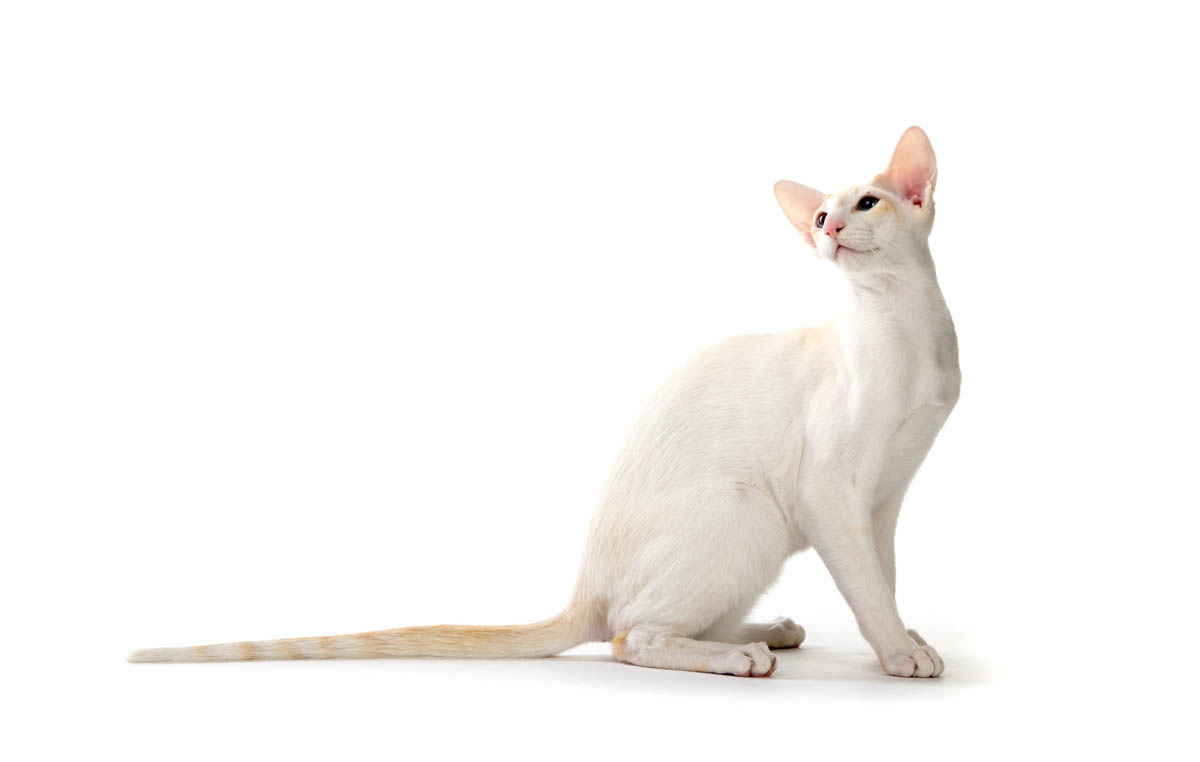 Also known as a red point, the flame point Siamese is a pointed cat with pale red markings on the nose, ears, and tail. Red (and tortoiseshell) were introduced to the Siamese in the 1940s by Dr Nora (sometimes referred to as Norah) Archer in Britain and Alyce de Filippe in America.

Most cat councils recognise the flame point as a Siamese, however, the Cat Fanciers Association and the World Cat Federation recognise them as a Colourpoint Shorthair.

History of the flame point Siamese

Flame points in the United States

There isn’t much information on the early flame point in the United States. Ron Reagan, author of Siamese Cats (1940) writes:

Red Points were produced by breeding Seal Points with self-red or red tabby Shorthairs and then mating the resulting offspring with Siamese. In the later 1930s, Dr. Joseph C. Thompson (the man credited with introducing the Burmese to the Western world) of San Francisco became interested and involved in the development of Reds. From the 1940s on Alyce de Filippe advocated the acceptance and worked on the development of Red Points and it is Mrs. de Filippe who is most directly responsible for the success of this variety in the United States. [1]


Flame point in the United Kingdom

Lucy Price gave Dr Nora Archer Somerville Scarlet Pimpernel (Robber), a male flame point kitten. His father was a Seal Point Siamese named Yewtree Yaanta owned by Mrs. Gordon Wilson, and his mother was a tortoiseshell cat of Siamese type called Amanda. Amanda’s mother Devoran Sally Girl (Ming) was born in 1945. Ming’s owner accidentally let her out and she was mated by a red tabby moggie who must have carried the Siamese coat pattern. [2]

Dr Acher writes: ‘Fortunately there is no mystery about this breeding. His mother (Amanda) was a Tortoiseshell bred from a Seal-point Siamese queen and a red shorthair male. To put his genetical make-up, as far as colour is concerned, into simple language, he sets out to be a red tom but his three Siamese grandparents were too much for him. He received from both parents the gene for true Siamese restriction of colour to the points, so his body is white and his points are red. We registered him as Scarlet Pimpernel, but his everyday name is Robber. He is a large handsome fellow, very definitely Siamese in type; long, svelte and high on the leg. His head is good and his forget-me-not blue eyes are almond-shaped and well-set. His ears are deep gold, his nose is the same colour and his mask is a paler gold.’

The flame point Siamese is an intelligent, loyal, loving breed who forms close bonds with his or her family, often bonding with one person in particular. Some Siamese can be quite jealous and can be demanding of attention if they feel they are being ignored.

Flame Points love to follow their family from room to room providing a running commentary as they go. Their intelligence makes them easy to train to play fetch or walk on a harness.

Due to their people-loving nature, they don’t do well if left alone for extended periods. If you are out of the home a lot, consider adopting two cats to keep each other company.

The flame point Siamese is a medium-sized, elegant breed with a lithe, muscular and tubular body and long, tapering lines. The ideal type is identical to other Siamese or Colourpoint Shorthair colours.

Red points are found on the face (mask), ears, paws and tail (known as points), while the body is an off-white colour. This colouration is due to partial albinism which inhibits the development of colour on warmer parts of the body. Due to the warmth of the uterus, kittens are born white and will develop their colour as they mature.

The face is longer than it is wide, forming a wedge that starts at the nose and flares out in straight lines to the tips of the ear, forming a triangle. The ears are large; the almond-shaped eyes are a stunning blue.

The Siamese coat pattern is striking. The face, paws, ears, and tail (points) have a darker colouring; the body is light in colour. The coat should be short, fine and silky to the touch.

All cats, purebred or mixed breed can be prone to specific health problems, Siamese (including flame point) may have a higher incidence of the following:

Black spots, known as lentigo may develop on the eyelid margins, nose and lips of flame point Siamese cats. This is cosmetic only, but should always be checked over by a veterinarian to rule out anything more serious.

Caring for a flame point Siamese

The flame point Siamese is easy to care for. Their short coat can benefit from a weekly brush to remove loose hairs.

Clean the teeth once a day with a pet toothbrush and toothpaste to prevent gum disease.

Trim the claws once every 4-6 weeks on indoor cats, providing a cat tree or scratching post can help the cat to shed the loose outer layer of the claws.

Feed a premium diet twice a day and leave fresh water out at all times.

All cats should see a veterinarian at least once a year, and once the cat reaches seven, bi-annual visits are recommended.

Purebred cats should always be purchased from a registered cat breeder. Do your homework when selecting a breeder as there are some scammers out there.

The best way to find a registered flame point Siamese breeder is to check with cat associations in your country. Most will have a listing of breeders on their website, and if you cannot find one, contact the association.

All registered breeders will have a prefix (the name of their cattery). It is always a good idea to search social media as well as the Internet for reviews from previous kitten buyers. Find out which cat association the breeder is registered with, and check to see if they are listed on the cat association website.

If possible, visit the cattery to meet the kitten and his or her parents. The cattery should be clean and not overcrowded and all cats should be in good health. Look at the overall appearance of the cats, and check for ocular or nasal discharge, sneezing as well as energy levels. Kittens should be energetic, curious and friendly.

As flame point Siamese cats are a recognised breed, the breeder should provide you with the pedigree which is the cat equivalent of a birth certificate and is issued by the cat registry the breeder is registered with.

Find out if the breeder screens for genetic diseases, and which ones. Do they offer a health guarantee on the kitten and for how long?

The flame point Siamese is less common than other colours, but it is not a rare breed of cat.


How much does a flame point Siamese cost?

The cost of a flame point can vary. Breeding and show cats cost more than pet-quality cats. Pet quality means that the cat may have a minor flaw such as a kink in the tail. Generally, you can expect to pay between $1,000 to $1,500 for a flame point Siamese.

Why are most flame points male?

The red (also known as orange) colour is sex-linked, which means it is located on the X chromosome and is symbolised by the letter O (for orange). O is dominant over non-orange (o), and O determines whether a cat will produce eumelanin or not (dominant epistasis). Pheomelanin (red pigment) completely replaces eumelanin (black pigment) in male cats.

Every cat inherits one copy of a gene from each parent including the sex genes (XX for female, XY for male). For the female to be a flame point, she must inherit the O gene from each parent. If she inherits one O gene and one non-orange gene (o), she will be a tortie point. This occurs because each cell switches off one of its X chromosomes (known as lyonisation or X inactivation) at random. Therefore she will display random colours of both orange and non-orange.

Female cats, in general, tend to be more independent than their male counterparts, but genetics and early experiences shape a cat’s temperament more than the colour of its coat. Male flame points tend to be more laid-back.

The flame point Siamese is not a mean breed, and are known for their loving and loyal nature.

Is there such a breed as a longhaired flame point Siamese?

The Balinese is essentially a longhaired Siamese, and some breeders breed flame point Balinese.

Flame point Siamese and Siamese cats, in general, do meow a lot.

The flame point coat can be found in other breeds which accept colourpoint including the Devon Rex, Cornish Rex, Balinese (longhaired Siamese), Exotic, Persian, Munchkin, Sphynx and Scottish Fold.