Cats have eight nipples, which run along the underside of the body in rows of two. Both female and male cats have nipples that are pale pink in colour and approximately 1cm in diameter. Nipples increase in size during both pregnancy and lactation.

Always seek medical attention if you notice nipple or mammary gland swelling in a cat.

In the non-pregnant cat, nipples can be hard to find under the cat’s thick layer of fur.

Causes of nipple and breast swelling in cats 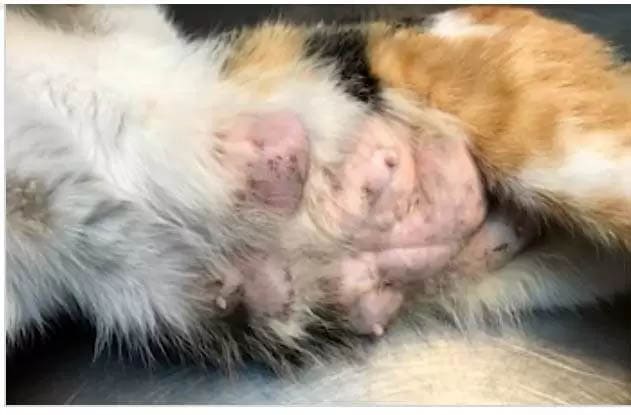 A female cat’s nipples will pink up and become enlarged from the third week of pregnancy, which is perfectly normal.

Mastitis is an infection or inflammation of the mammary gland(s) which occurs in lactating queens.

Lethargy, loss of appetite, fever, the queen may refuse to nurse her kittens; if they are nursing, they may become sick.

Antibiotics to treat the infection and analgesics (painkillers) if necessary. Use warm compresses on the area to help the milk drain from the gland(s).

Mammary cancer is the third most common cancer in cats and is usually due to an adenocarcinoma, which is a fast-growing tumour. Unspayed older female cats are at the highest risk, although it can affect spayed females and even male cats (less than 1%). Mammary cancer can affect one or multiple glands.

A firm, nodular mass around one or more of the mammary glands, ulceration of the skin, milky or bloody discharge from the nipple, infection, swelling, pain and unexpected weight loss.

Radical mastectomy (removal of the entire mammary chain), at least on the affected side, but the surgeon may also recommend removing both chains and associated lymph nodes. Chemotherapy as a follow-up.

An excessive accumulation of milk in the gland (usually due to weaning) causes an inflammatory response.

Swelling of the affected breast.

In most cases, treatment is not necessary as galactostasis should resolve in time.

A benign tumour of the mammary gland occurs most often in intact females, although it can also develop in intact males receiving hormone therapy.

Hyperplasia (enlargement of the gland or glands) develops one to two weeks after estrus or 2-6 weeks after progestin treatment. A build-up of fluid (edema) in the skin of the hind legs is also common.

Where possible, ovariohysterectomy (spay) the female, or remove the affected gland(s).

Spay the intact female if possible and withdraw progesterone treatment. Painkillers can be given to relieve discomfort. Surgical removal of the affected gland if ulceration is pregnant.

It is essential to investigate any swelling which develops on or around a cat’s nipple and breast tissue. During the examination, the veterinarian will perform a complete physical exam and obtain a medical history from you.

The veterinarian will check the nipples carefully, to look for swelling, pain, nipple colour and discharge. Mastitis will be suspected in the nursing queen.