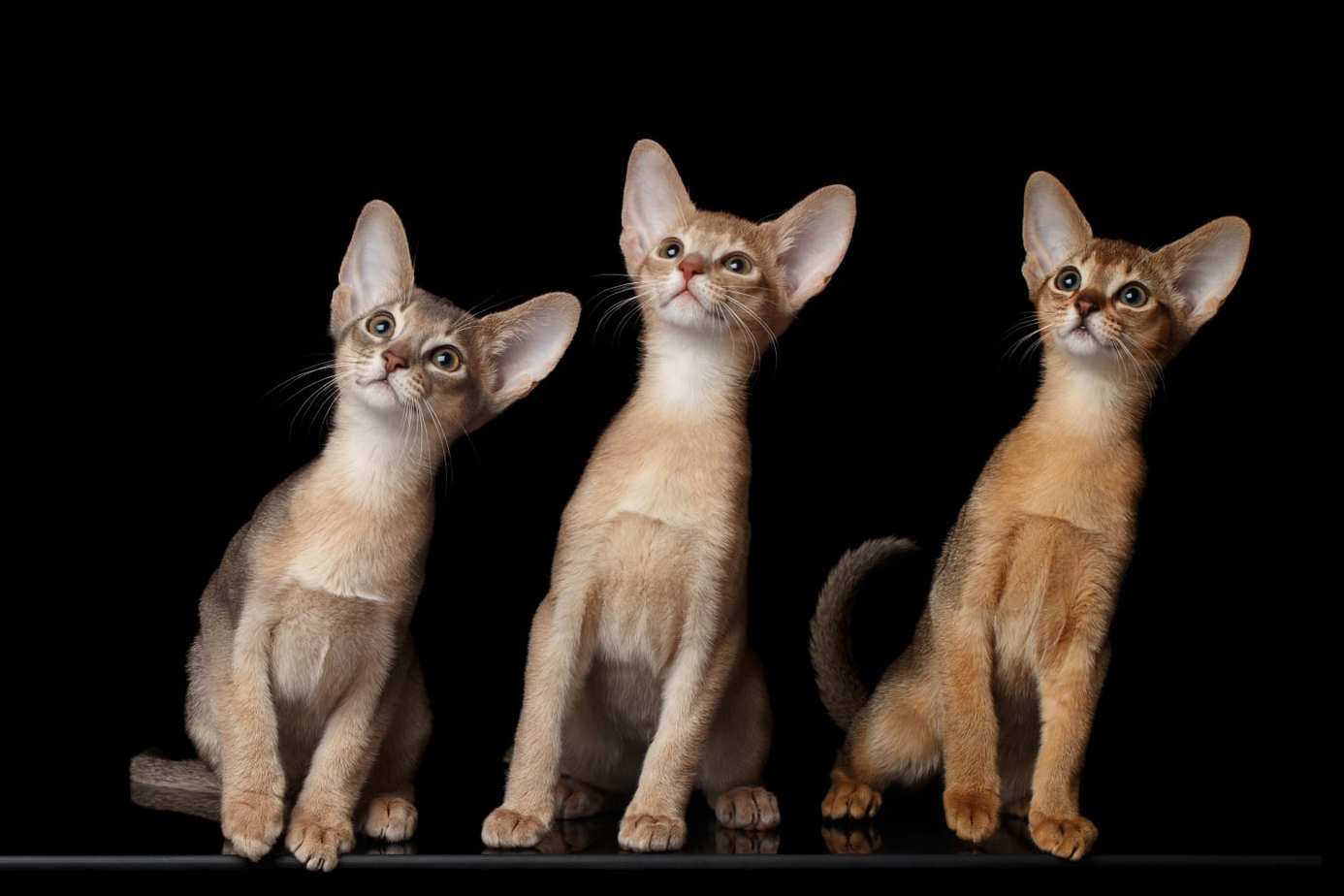 Affectionately nicknamed Aby, the Abyssinian is one of the oldest cat breeds. Its origin is somewhat unknown and there are several stories as to how the breed came about. They have a similar appearance to ancient Egyptian cats.

Abyssinians are playful, affectionate, energetic, friendly, loving and love to be up high. They make an exceptional family pet.

The first Abyssinian cat was brought to England in 1868. In the book Cats, Their Points and Characteristics (published in 1874), author Gordon Stables mentions the following…”Zula, the property of Mrs Captain Barrett-Lennard. This cat was brought from Abyssinia at the conclusion of the war…” In the Harpers Weekly supplement dated January 27, 1872, there is an illustration of several feline exhibits from the London Crystal Palace show, including an Abyssinian cat. In the following write up the journalist writes

“The third prize was taken by the Abyssinian cat, shown in the lower right-hand corner of the illustration. She was captured in the late Abyssinian war, and was most remarkable for her woe-begone appearance, seemingly discontented at her sudden elevation into notoriety, and longing for her barbaric freedom in the good old days of King Theodore.” 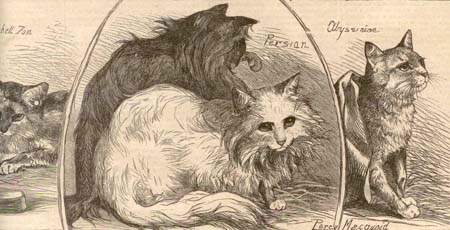 Sadly there is no written record which traces the early Abyssinians in Britain. It is believed by some breeders that the Abyssinian cat was actually created by crossing silver and brown Tabbies with English ticked cats known as bunny cats.

The Abyssinian cat was officially recognised as a distinct breed in 1882. The first standard of points was published in Harrison Weir’s book in 1889 and the first Abyssinian registered in the National Cat Club Stud book was in 1896. 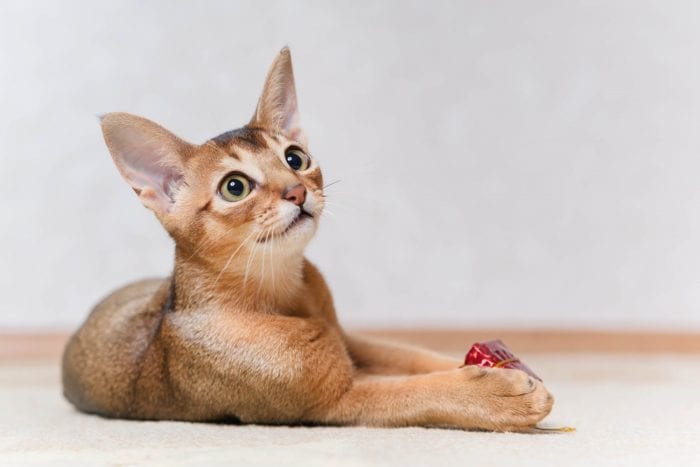 The body is long, lithe, muscular and in proportion. The legs are long and slender, with small oval paws. The tail is thick at the base, long and tapering at the tip. Abyssinians weigh between 4.5 – 6 kg (9.9 – 13.2 oz).

Modified wedge, with a muzzle that is neither pointed or square. Large almond-shaped eyes which range in colour from green to hazel and are circled with a dark line surrounded by a lighter colour. Ears are large.

Short, silky and close-lying coat with distinct ticking and a beautiful sheen. 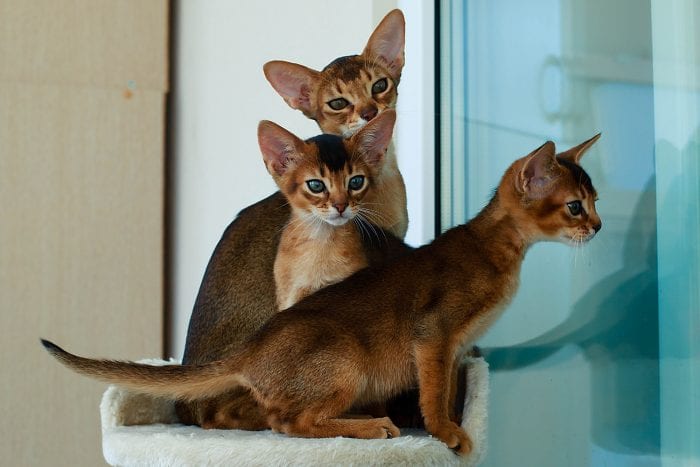 The Abyssinian comes in four colours, with photos at the end of the article.

Abyssinians are highly intelligent, extroverted and active cats who thrive on companionship. They are very dog-like and don’t do well when left on their own for long. Abyssinians are a high energy breed levels and love to be up high, so if you want a cat who is on the go all the time, then the Abyssinian is perfect. They love people and like to be a part of everyday family life. Abyssinian cats often enjoy a game of fetch with their human companions. Abyssinians love everybody, as long as they are the centre of attention they don’t tend to play favourites with any one member of the family. Breeders and Aby lovers refer to them as the clowns of the cat kingdom.

If you are out of the house for long hours, consider adopting two cats. Abyssinians thrive on company, and it is important that if you are thinking of adopting an Aby, that you can give him the time and attention he needs. Words often used to describe Abyssinians include loyal, active, intelligent, playful and inquisitive. They are not an overly talkative breed and have a quiet voice.

Always buy a purebred cat from a registered cat breeder. A cat from a backyard breeder will cost less, but you don’t know what you will get. Try to see the kitten in his environment, and if possible meet his mother too. I really believe what you see as a kitten is what you will get.

I personally like to buy a kitten who grew up inside the home with the breeder and their family. Kittens should not leave their home until they are at least 12 weeks old, by which time they will have received two vaccinations. Many breeders also opt to desex (spay or neuter) the kitten before he goes to his new home. 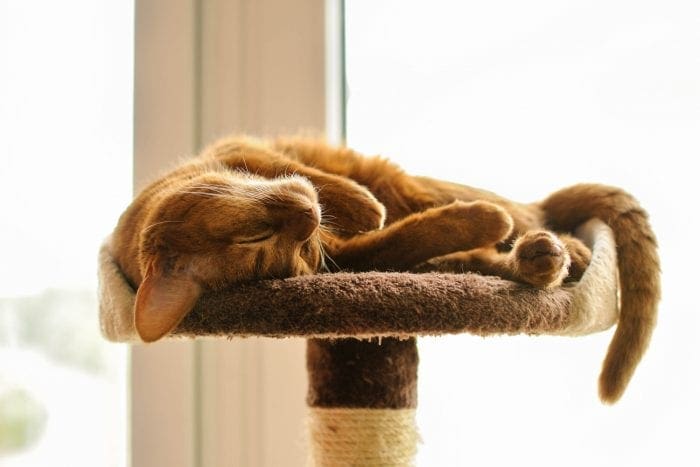 The short hair of the Abyssinian coat requires little more than a five-minute groom once a week to removed loose hairs. Indoor cats should have their nails trimmed every 4-6 weeks. Both grooming and nail trimming should start in kittenhood.

When you bring your new kitten home, feed him the same food he was fed at his old home, if you would like to change the type of food he eats, gradually introduce the new food while reducing the old type over a few days. This can help prevent tummy upsets.

Oral hygiene is important with any cat, brush the teeth daily with a pet toothbrush and toothpaste (never use human toothpaste), or feed raw chicken necks/ chunks of raw steak two to three times a week.

Your Abyssinian should see a veterinarian once a year for health checks.

Provide your Abyssinian with plenty of toys to keep him occupied and help him burn off some energy. Wand toys are perfect, they can stalk, chase and catch them.

As with all cats, purebred or domestic, some can be more prone to health problems. Bear in mind that most of these conditions are still rare, even in Abyssinian cats and most breeders work hard to eliminate these diseases by careful breeding as well as genetic testing, where possible.

The average lifespan of an Abyssinian cat is between 12-15 years.