The Bombay cat is a stunning, sleek, jet black cat who is Burmese type. The breed came about by mating Burmese and American Shorthair cats.

The personality is similar to that of their Burmese cousins. They are laid back, friendly, loving and get along well with pets and children.


A miniature black leopard is a commonly used term to describe the Bombay cat and they certainly fit the description well. The breed was developed in Kentucky in 1958 by Nikki Horner of Shawnee Cattery, who mated a sable Burmese with a black American Shorthair. She aimed to create a copper-eyed mini panther. Nikki thought the Bombay resembled the black leopard of India, hence the name Bombay.

The Bombay is of the Burmese type but with a jet black coat. British breeders were able to create the same cat by mating Burmese to domestic or British shorthairs. The Bombay cat is classified as part of the Asian group in the UK.

The American and British Bombays share the same name but are considered to be two different breeds of cat. Both breeds do share many physical characteristics.

The black coat colour is the result of a dominant gene, however, if both parents carry the recessive sable gene, some kittens will be born sable (brown).

The Cat Fanciers Association awarded the Bombay champion status in 1976. 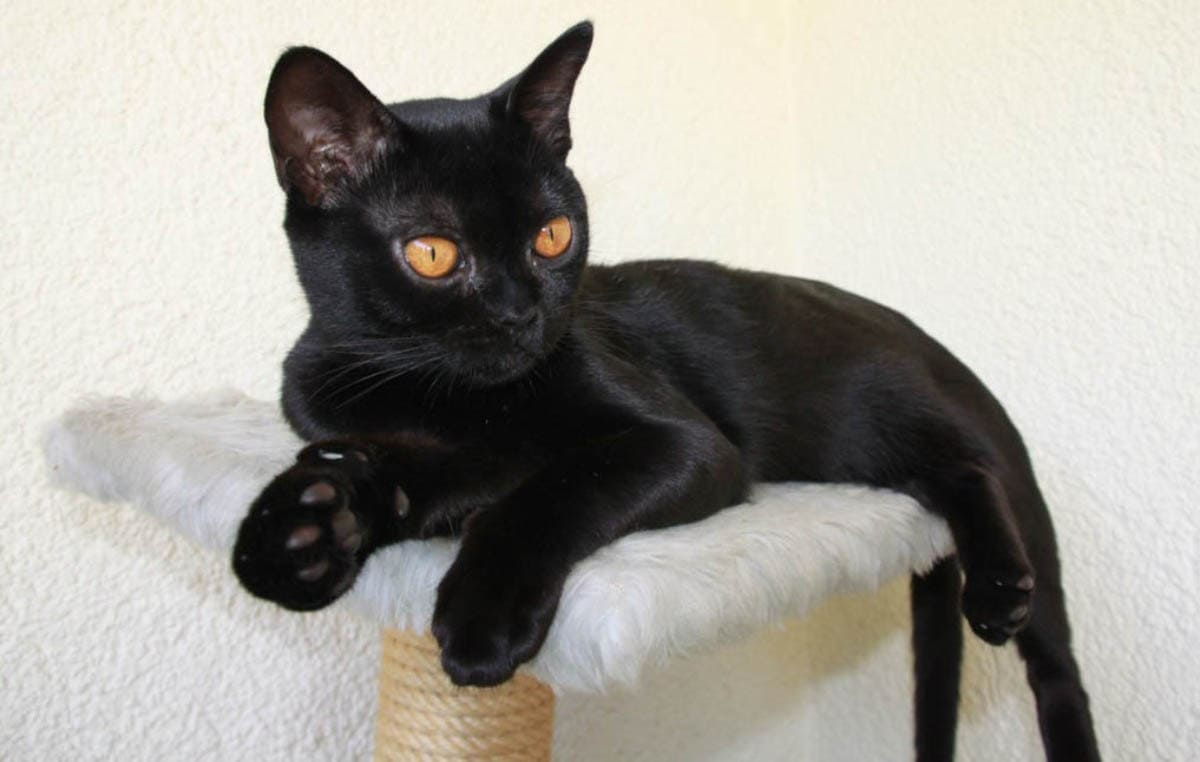 The Bombay is a medium-sized cat with a body conformation similar to that of the Burmese. The influence of the American Shorthair has meant that the head is rounder, with expressive golden eyes, wide-set small ears which are slightly rounded at the tip.

The jet black coat is extremely short, close-lying with almost no undercoat. There should be no white hairs or tabby markings in the coat.

The personality of the Bombay is similar to the Burmese. They are friendly, outgoing, sociable cats who thrive on human companionship. They are full of energy and love to play games. The Bombay cat has a distinctive meow and some can be quite talkative.

They are extremely intelligent and are easy to train to walk on a leash. Many Bombays also love to play fetch. He gets along well with humans, including children, and other pets. Bombays adapt well to apartment living & should not be allowed outside to roam.

Is my cat a Bombay?

Unless you have purchased a pedigree Bombay cat from a registered breeder, the chances are your cat is not a Bombay as the breed is extremely rare. Most cat breeders sell their kittens already desexed, to prevent unwanted litters.

Black is one of the most common coat colours in the cat world, so it can be easy for people to assume their black cat is a Bombay, but due to the scarcity of these cats, it is highly unlikely.

It may be possible to run a DNA test on your cat, which can provide information on the cat’s background.

There is no evidence to suggest the Bombay cat is hypoallergenic.

Yes, the Bombay cat is extremely friendly and people-oriented.

Can a Bombay cat have a white spot?

No, Bombay cats should not have a white spot.