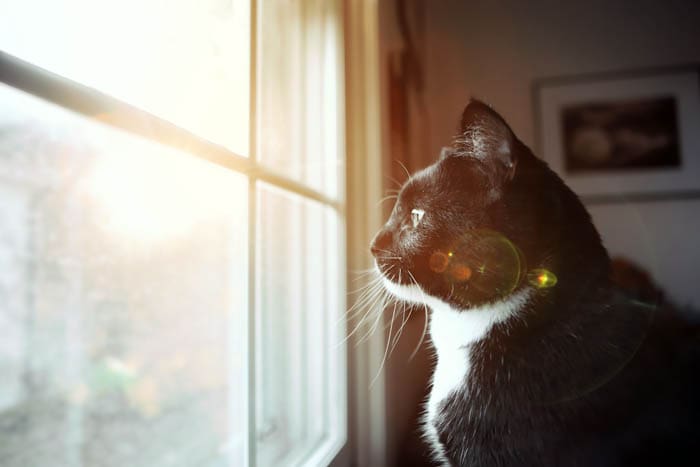 Table of Contents hide
1 Do cats get lonely if they are left alone?
2 Aren’t cats independent?
3 Do cats get lonely without another cat?
4 What can we do to keep cats happy?
5 How long is it okay to leave a cat alone?
6 Signs of loneliness in cats

Cats have a reputation for being independent and even standoffish, but as most cat lovers know, that is mostly a misrepresentation and our love of cats stems from the companionship they provide. This is a two-way street, and they need as much as we receive.

Do cats get lonely if they are left alone?

There are a lot of factors to consider which include the breed of cat and the personality. Some breeds are more dependant on companionship than others. Siamese cats are well-known for forming bonds, especially with one person and like to be with their companion as much as possible. British Shorthairs are a little more independent, but even so, they still need companionship and interaction to some degree.

Compared to 40 years ago, more households are working longer hours and to top that off, and there is an ever-increasing number of people who have chosen to keep their cat safely indoors. Which means cats are spending more time in the home on their own.

Cats are generally more independent than dogs and have retained many of their former wild behaviours such as hunting. But cats have been domesticated by humans over the past 8,000 years and most cats do need companionship. It all comes down to each cat’s personality, some are far more independent than others. All domestic cats need to have their physical and emotional needs met, some just ask for less than others.

Do cats get lonely without another cat?

This depends on the personality of the cat as well as the amount of time the cat’s human family are at home. Two cats can keep each other company, but keep in mind that not all cats enjoy the companionship of another cat.

We share our home with four cats. Two are bonded, one is independent and indifferent and one actively seeks out human attention but is somewhat hostile towards the other cats. This is why I recommend adopting at the same time so that they can grow up together.

Some cats prefer the company of other cats and indifferent to their human family. Many years ago, we adopted a male Burmese called Suni, a few months later we decided to adopt a second Burmese, Misha. Misha was shy and timid towards us but quickly formed a strong bond with Suni. When he passed away, she grieved for him, she formed a friendship with our next Burmese, Mitzy, but it was never the same.

What can we do to keep cats happy?

How long is it okay to leave a cat alone?

Ideally, no more than 8-9 hours and always provide access to clean water, food and litter trays during this time.

It is not safe to leave a cat along for more than a few hours, due to the risk of acute illness, an accident, loneliness and boredom. Recently my two Tonkinese boys ran down the hallway and into my bedroom, the first one jumped out of the open window into the cat enclosure, the second cat jumped and his claw became snagged, leaving him dangling. Thankfully, I was right behind them and was able to free him but if I hadn’t been there, he could have sustained serious injury.

Obviously, the above could have happened if I had gone to check the mail, shopping or at work. The point is, the longer you are out of the house, the more time they can potentially have an emergency.

If you plan to be away for more than a few hours, hire a pet sitter to come in twice a day to feed and check on the cat, find a house sitter or take the cat to a boarding cattery. A lot of veterinary nurses are also cat sitters as a second job, so always check with your veterinarian first. The benefit of this is that a veterinary nurse can also administer medications and keep a closer eye on cats with health issues.

Signs of loneliness in cats

Loneliness can manifest in many ways and can often be mistaken for bad behaviour. Common signs a cat is unhappy include:

Always schedule a veterinary appointment if you notice any behavioural changes to rule out an underlying medical problem.

Why Do Cats Knock Things Over?
How to Help a Scared Cat
Cat Vital Signs-Respiration, Heartbeat and More
Cats With Blue Eyes