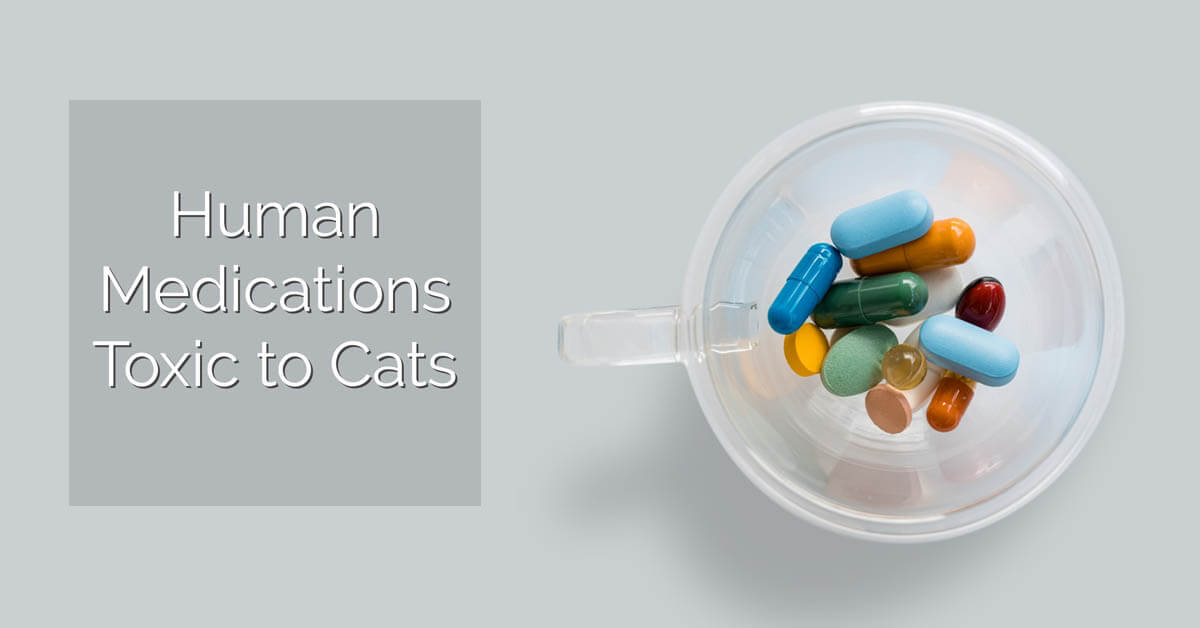 It’s easy to think that because a medication is safe for humans, it must be safe for cats, but this couldn’t be further from the truth. Many common over the counter and prescription are extremely toxic to cats and even low doses can kill them.

All medications are processed by the liver, which is the body’s detoxification factory. It is easy to assume that cats process drugs the same way humans do, but that is not the case. With many drugs, cats lack the necessary enzymes required to break them down.

50% of phone calls to the Pet Poisons hotline was in regards to human medications ingested by pets. Dogs are more indiscriminate when it comes to what they will eat, but cats still regularly become poisoned with human medications.

How does poisoning occur?

Common medicines which cause poisoning in cats

According to the Pet Poisons Helpline, these are the most common medications which cause toxicity in pets.

1) Over the counter NSAIDs

Ibuprofen and Naproxen inhibit the production of an enzyme called cyclooxygenase, which produces prostaglandins. Prostaglandins perform several roles including promoting inflammation, pain, fever, regulating glomerular filtration rate in the kidneys as well as producing a layer of mucus which protects the inner lining of the intestinal tract.

Acetylsalicylic acid (Aspirin) may be prescribed to treat certain diseases, but only in very low doses, due to the risks associated with this drug, close veterinary monitoring is necessary. The drug is broken down by an enzyme known as UGT1A6, which cats only produce in small amounts. Ingestion causes inflammation, bleeding, ulceration, perforation of the stomach, metabolic acidosis, kidney, and liver damage.

This over the counter medication is used to treat mild pain and inflammation. Cats lack the enzyme glucuronyl transferase to break the medication down in the liver. The medication can cause a life-threatening condition known as methemoglobinemia (metHb) which is an increase in the production of methemoglobin, a form of hemoglobin which is unable to function as an oxygen carrier, resulting in a lack of oxygen to the organs and tissues.

Toxic wastes known as metabolites build up in the bloodstream resulting in liver failure.

Heinz bodies form on the red blood cells leading to their destruction.

As the liver becomes damaged, neurological disturbances and jaundice (yellowing of the gums and whites of the eyes) develop.

These prescription medications are used primarily to treat depression, anxiety, sleep disorders, compulsive disorders in both humans and cats. While some are used to treat disorders in cats, the dosage is much lower than that prescribed to humans and any cats who have been prescribed antidepressants by their veterinarian should be closely monitored.

The toxic dose varies depending on the type of antidepressant ingested.

Antidepressants come in several classes, which include:

These medications are used to treat attention deficit disorder in people and to treat hyperactivity in dogs but are not used in cats. ADD medications contain powerful stimulants such as amphetamines and methylphenidate, which stimulate the release of norepinephrine which in turn stimulates the central nervous system.

Benzodiazepines are a class of drug commonly used to treat anxiety, sleep disorders, epilepsy and are muscle relaxants. These drugs are used in both human and veterinary medicine, including cats. While these drugs can help to reduce anxiety in people, they often have the opposite effect in cats. Also, some types of benzodiazepines can cause liver failure.

Common benzodiazepines include the following drugs:

Liver failure symptoms may include:

Angiotensin-converting enzyme (ACE) inhibitors are medications used to manage heart disease and hypertension (high blood pressure) in humans and veterinary medicine. They work by relaxing and dilating (widening) the blood vessels. These drugs aren’t as toxic as many listed on this page, and when an overdose occurs, ACE inhibitors cause low blood pressure (hypotension). It is also possible for hyperkalemia and renal failure can occur.

Beta-blockers are drugs which are also used to treat high blood pressure and certain heart diseases in both human, and a few of these drugs are used in veterinary medicine. However, unlike ACE inhibitors listed above, beta-blockers are extremely toxic to cats even in small doses.

Common Beta-blockers include the following:

Symptoms of beta-blocker toxicosis can develop within 20 minutes, although more commonly they appear within 1-2 hours of ingestion and as long as 6 hours.

Other human medications toxic to cats

There are too many medications to include in this article, so I have covered the most common ones which cause poisoning in cats (and dogs). Also, other common medications include:

What should you do if your cat has ingested a human medication?

Seek veterinary advice immediately and/or call the pet poisons hotline. Do not attempt to induce vomiting unless you have been told to do so by a medical professional.

They may give you advice on emergency care for your cat; however, in most cases, it will be necessary to bring your cat to the veterinary surgery for medical treatment.


If you believe your cat has ingested a human medication, seek veterinary attention immediately.

Treatment will vary depending on the medication your cat has ingested. I’ve covered this topic in much more detail here but will list the basics.

If the cat ingested the medication within the previous two hours, gastric decontamination could be attempted, which may include inducing vomiting or pumping the stomach.

Administration of activated charcoal to bind to the toxins.

Supportive care such as intravenous fluids to treat dehydration and help the body flush out the toxin, anti-nausea medication, anti-seizure medication, muscle relaxants to control tremors, oxygen therapy for cats who are experiencing breathing difficulty.