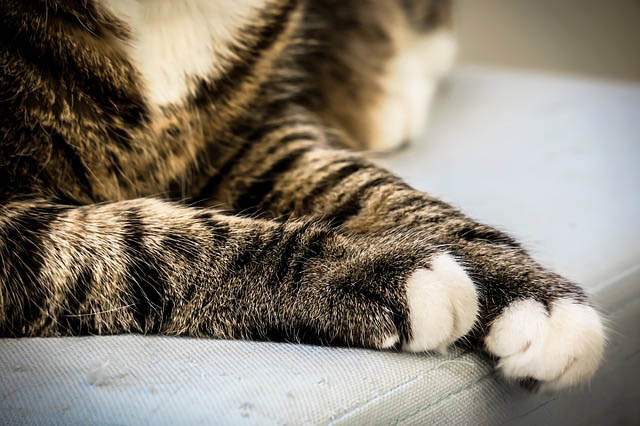 Limping (also referred to as lameness) is a common symptom which can affect cats of all ages. It can affect one or all four of the cat’s legs. In this article, we look at some of the more common causes of limping in cats.

Osteoarthritis (arthritis) is a painful condition where the cartilage which cushions the joints wears down, resulting in bones rubbing on bones. It can affect cats of any age; however, it is more common in middle-aged to senior cats. There are several factors which can lead to the development of arthritis which includes obesity, previous trauma to the joint, hip dysplasia and cruciate ligament rupture are all predisposing factors.

It is not possible to reverse damage to the joints. Therefore the goal of treatment is to slow down the progression of the disease and relieve symptoms with lifestyle changes.

Food or food compounds which have medical benefits.

A walled-off collection of pus under the skin which is usually the result of a bite from another cat. Entire male cats who roam are at greatest risk due to territorial fighting. An abscess can develop on any part of the body. However, they are most common on the front legs, the base of the tail, face, and neck.

The veterinarian will administer a general anesthetic, lance the abscess and drain the pus, and then flush the area with antiseptic. If the abscess is large, a surgical drain will be necessary to remove blood and discharge from the area. A course of oral antibiotics will be prescribed.

Hip dysplasia is an abnormality of the hip joint which is caused by a shallow hip socket which doesn’t fully cover the ball at the end of the femur (thigh bone). This causes the head of the femur to slip out of place (subluxation).

The condition is rare in cats; however, there is an increased incidence in large-boned breeds which include Maine Coons, Norwegian Forest Cats, Persians, Himalayans, Exotics and in the smaller Devon Rex.

There are several treatment options available for cats with hip dysplasia which are dependant on the age of the cat as well as the severity of the condition. Cats with mild hip dysplasia may require no treatment at all.

This surgery is best for young cats with minimal or no degenerative changes to the hip joint. It involves making three incisions in the rump, groin, and hip, the pelvis is then cut in three places and rotated. A plate and screws secure the pelvis in its new position.

This involves removing the head and neck of the femur. The muscles that hold the joint in place will continue to do so, without the femoral head rubbing on the socket. This surgery is cheaper than a total hip replacement. One leg may be shorter than the other after this surgery, and your cat may have a limp, but this should cause him pain or discomfort, and he should have a normal range of motion.

For older cats who have arthritis. A total hip replacement involves replacing the femoral head and socket with a metal and plastic implant.

Muscles, ligaments, and tendons are the soft tissue which connect, support or surround other the bones (and other organs). Soft tissue injuries include tears, strains, contusions and ruptures and are common in cats. They can occur in the front or hind legs.

Common causes of soft tissue damage include landing poorly, falls, twisting (such as a sudden change in direction at speed), fights, automobile accidents and due to abuse can all cause damage to the soft tissues.

Most minor soft tissue injuries will heal on their own with rest and anti-inflammatories.

Moderate soft tissue injuries may need a splint, to keep the area still during recovery.

Severe injuries, such as torn tendons or ligament damage will require surgical repair.

Cancer is the uncontrolled growth of cells within the body and can affect the soft tissues, joints or bones in the leg. Although cancer can develop in cats of any age, it occurs more often in middle-aged to senior cats.

Surgery to remove the affected limb. Chemotherapy may be necessary as a follow-up.

The most common type of claw injury is a torn claw. It may be partially or completely torn off, causing a great deal of pain. Torn claws may occur when the claw becomes snagged on carpet, climbing a tree or fence, fence or more seriously, due to a motor vehicle accident.

Claw injuries are typically acute, with sudden onset of symptoms which include:

While injuries to the claw are not life-threatening, serious claw injuries require veterinary attention to prevent infection.

Also known as fractures, a broken leg is a crack or a break in one of the legs. Most broken bones in cats are caused by trauma, such as being hit by a car or a fall from a height. Other causes of broken bones in the leg include bone infection, cancer, and hormonal imbalances, all of which weaken the bone.

This will depend on how severe the break is, in most cases, it will be necessary to surgically stabilise the bone and re-align the broken parts with the use of pins and screws. Once the cat is well enough to return home, cage rest will be necessary to allow nature to do its work repairing the bone.

How a bone repairs itself:

A blood clot forms and specialist cells remove pathogens and debris from the area and chondroblasts form a soft callus over the broken area. Osteoclasts then form new bone cells, and by four weeks a hard callus has formed to bind the broken bones together. Over the next few months, the bone begins to remodel until the bone returns to its original shape. 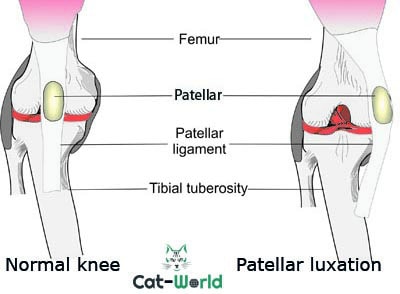 A patellar luxation (or luxated patellar) occurs when the cat’s kneecap dislocates from the groove it sits in (trochlear groove) and moves to either side of the knee joint in the hind legs. The disease is progressive and can get worse with age.

No treatment is generally necessary for cats with grade 1 or two patellar luxation without lameness.

Surgery for grades 3 and 4, preferably before arthritis has developed. There are several surgical treatments for patellar luxation, which depend on the type of abnormality present. 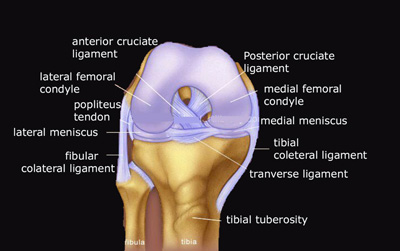 A cruciate ligament rupture is a tear in one or both of the X shaped ligaments which are located in the knee joint to keep it stable.

Causes of cruciate ligament rupture include a traumatic event which results in the severe twisting or pivoting of the knee joint or slow degeneration of the joint due to age which causes weakness. When the ligament ruptures, the entire joint becomes unstable, and the leg bones can move out of place.

There are several methods to stabilise the joint surgically. The meniscus will also be evaluated for tears as this is a common concurrent injury in cats with a cruciate ligament rupture.

Pros of surgery are that the cat returns to normal function faster and there is a reduced progression of arthritis. However, all surgery has risks and costs more than conservative management.