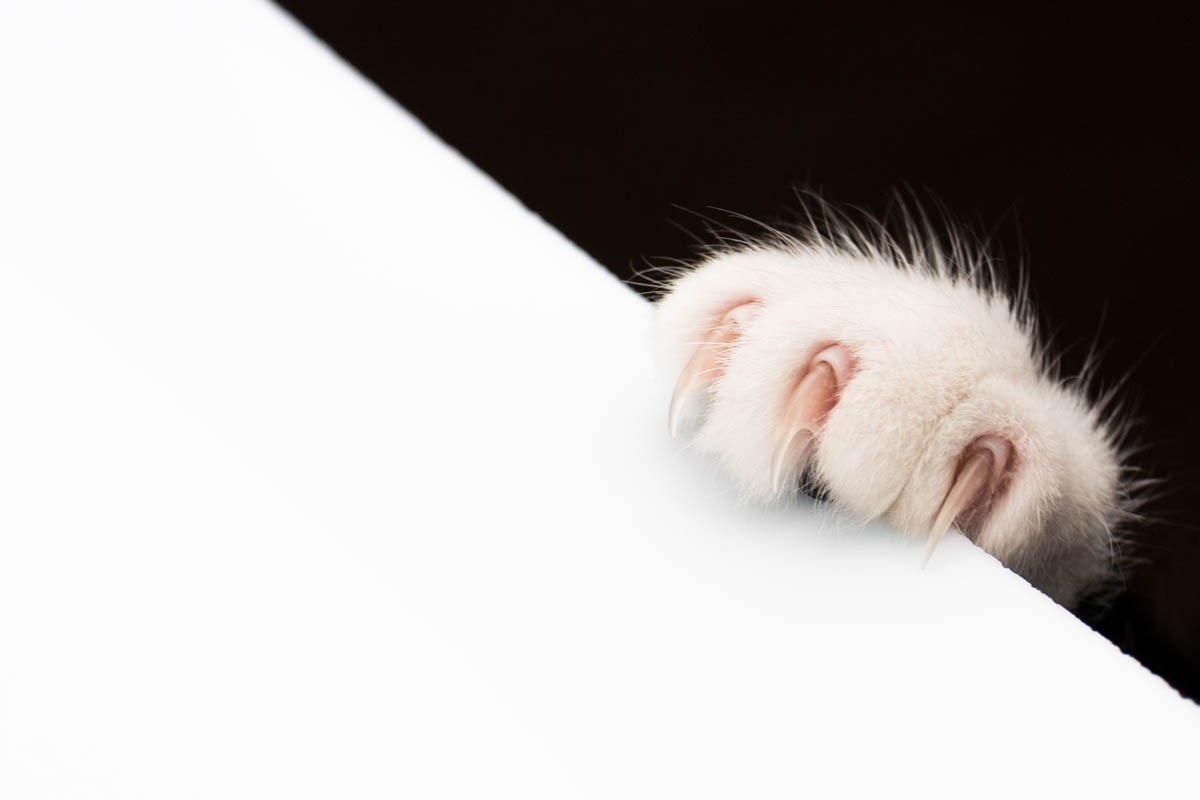 A cat’s claws are an amazing part of the anatomy which performs several important functions. Located at the end of each toe, the claws help the cat climb, balance, grip prey, defend against attacks from other animals and protect the toes (digits).

The claws are continually growing, with the outermost layer sloughing off every few weeks to make way for a newer, sharper claw.

The most common nail disorder can be caused by nail trimming, car accidents, and running away from a predator.

Symptoms – Signs of trauma may include shortened or jagged claws, bleeding, swelling, pain, reluctance to put weight on one leg.

Treatment – This depends on the severity of the trauma but may include cleaning and trimming the affected area, bandaging and possibly antibiotics to prevent secondary bacterial infection.

There are several causes of bacterial infection which include declawing complications, and trauma which can expose the underlying tissue to bacteria.

Symptoms – Inflammation of the matrix of the nail (onchyitis), pain, swelling, and discharge.

Ingrown claws (onychocryptosis) and can develop in older cats, particularly those who live indoors as cats become less active, there is less wear and tear on the claws. Arthritis is common among older cats too, which can sometimes make grooming and stropping, which strips off the outer layer of the claw difficult due to painful joints.

Symptoms – The claws become thickened and curl in on themselves.

Treatment – Keep the claws at a reasonable length with regular trimming. If you are unable to trim your cat’s claws yourself, see a veterinarian, it should only take him 5 minutes to do in-house at a minimal cost.

Brittle claws are common in older cats often in conjunction with overgrown claws. As cats age, their circulation isn’t as good as it once was and fewer nutrients reach the claw. Brittle and overgrown claws can eventually grow into the paw pad causing pain and infection.

Symptoms – Brittle claws can split when they are cut. Always use sharp nail cutters when trimming the claws, especially.

Treatment – Talk to your veterinarian about omega 3 fatty acids which can be of help.

Symptoms – Multiple areas of circular patches of hair loss with a slight redness to the affected skin. The claws may become weak, crusty, malformed (onychodystrophy) or soft (onychomalacia).

Treatment – There are several medications to treat ringworm, including Itraconazole, Griseofulvin, and Terbinafine, which are all tablets. Your veterinarian may also recommend lime sulfur dips.

A yeast that lives on the skin of many cats without causing a problem.

Symptoms – The yeast may no longer be kept in check in immunocompromised cats and can produce symptoms of infection. This may include areas of hair loss and greasy exudate around the claws and paronychia.

Treatment – Weekly baths in Malaseb, or for more stubborn cases topical or oral therapy with ketoconazole, itraconazole or fluconazole. It is also important to find and treat the underlying cause.

A skin disease caused by the Demodex mite, which occurs more often in dogs but can affect cats too, especially malnourished or immunocompromised animals.

Symptoms – Single or multiple lesions of alopecia, hyperpigmentation of the skin on the toes, and thickening and curvature of the claws (onychogryphosis).

Treatment – Demodicosis often resolves on its own without treatment. However, your veterinarian may decide to treat your cat with lime sulfur dips or Ivermectin to kill the mites.

An autoimmune disorder where the cat’s immune system attacks epidermal adhesion molecules causing them to separate. This condition has several clinical presentations and can affect multiple parts of the body including the claws and surrounding tissue.

Symptoms – Small red spots and areas of hair loss around the claws followed by fluid-filled blisters which rupture to form a yellowing crusting erosion.

Treatment – Immunosuppressive therapy such as cortisone, if this doesn’t relieve symptoms, other medications may be added. Oral antibiotics may also be prescribed to treat secondary bacterial infections.

An autoimmune disorder in which antibodies are formed against specific tissues in the cat’s own body. Usually, antibodies are produced in response to antigens such as bacteria or viruses. The cause isn’t known, but it is thought it could be genetic, environmental, due to medications or exposure to sunlight. Any part of the body can become affected including the claws and surrounding tissues.

Treatment – There is no cure for SLE; treatment includes immunosuppressive therapy such as corticosteroids. These will initially be given at a high dose, and once the condition is under control, the dosage will be tapered down. Non-steroidal anti-inflammatory drugs to reduce inflammation and treat pain. Antibiotics to treat a secondary infection. Limiting sunlight exposure may also be necessary.

Also known as ‘pituitary gigantism’, acromegaly is a disease caused by a benign tumour of the pituitary gland, which results in excess growth hormone being produced. Middle-aged to older cats are most at risk of developing this disease.

Symptoms – There are several symptoms of acromegaly, all relating to the excess growth hormone which leads to enlargement of the extremities, particularly the head, organ enlargement, heart failure, diabetes and hardening and thickening of the claws.

Treatment – The goal of treatment is to slow down the progression of the disease which may include radiation therapy to shrink the tumour, medications to inhibit or reduce levels of growth hormone, controlling diabetes with insulin and managing heart failure.

This endocrine disorder is usually caused by a benign tumour of the thyroid gland which is responsible for the secretion of thyroid hormone, responsible for controlling metabolism. Hyperthyroidism typically affects cats over ten years of age.

Symptoms – Weight loss despite an increased appetite, diarrhea, vomiting, poor coat condition, increased heart rate and in some cases thickening of the claws.

Treatment – Surgery to remove the tumour, radioactive iodine treatment to kill the tumour or medications to control the disease.

A zoonotic protozoal infection found in the Mediterranean and the Americas affects the skin and organs.

Symptoms – Cutaneous leishmaniasis cause nodules to develop on the face and extend along the rest of the body, including the feet, the claws may be overgrown, deeply curved (onychogryphosis) and brittle.

Treatment – Surgical removal of nodules or medication such as allopurinol.

Several tumours can affect the digits and claws of cats including squamous cell carcinoma, fibrosarcoma, adenocarcinoma, melanoma, and hemangiosarcoma.

Treatment – Surgical removal, in some cases, amputation of the entire digit or foot. Radiation or chemotherapy may be necessary after surgery.

Other less common causes of claw disorders include a food allergy, Cushing’s disease, hypothyroidism and vasculitis (inflammation of the blood vessels).

As you can see, there are several causes of claw disorders in cats. A single claw is usually due to trauma, or less frequently a tumour.


Symptoms will vary depending on the underlying cause but can include:

Your veterinarian will perform a physical examination of your cat and obtain a medical history from you. He will carefully check the affected claw and surrounding tissue. The number of claws and feet involved can help your veterinarian to narrow down a cause. Trauma is a probable cause if only one claw is involved. Multiple claws and feet may indicate systemic disease.

He may need to perform some diagnostic tests to determine the cause. This may include:

Further testing may be necessary to determine an underlying cause such as baseline tests which include a complete blood count and biochemical profile as well as specific blood tests depending on the veterinarian’s index of suspicion.


Cats are relatively easy to care for, but a routine once a week can prevent some nail conditions from developing, especially in older cats. Check the claws for signs of breakage and overgrowth and trim if necessary. Most cats only need to lose 1-2mm of the nail. Be careful not to cut the quick, which contains blood vessels and nerves. I have always used human nail clippers on my cats which seem to work fine, but you can also purchase nail clippers designed for cats. Some have a circle to place the tip of the claw inside and cut; this helps to reduce the chances of accidentally cutting into the quick.

Cats may benefit from the addition of omega-3 fatty acids to their food. These essential acids can help reduce inflammation and are great for skin nail and coat condition.

Provide your cat with a scratching post so that he can regularly strop his nails, which helps to remove the outer layer.