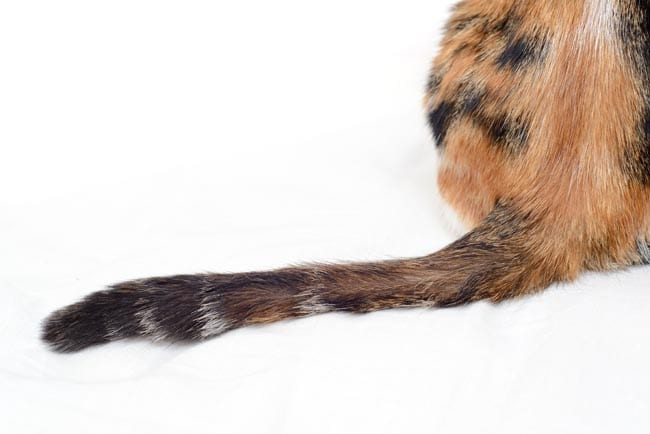 Table of Contents hide
1 What is the cat tail for?
2 Tail sucking
3 Kinked tails
4 Injuries and diseases of the cat tail

What is the cat tail for?

The cat’s tail is an extension of the spine and helps the cat balance and communicate. The tail (caudal vertebrae) account for 10% of the bones in the cat’s body. The average number of bones in the tail is between 20 and 23.

Some breeds of cat are known for their short tail or even complete absence of a tail. The Manx cat is probably the most famous cat to come to mind. Their tail or lack of comes in several forms.

The Japanese Bobtail and American Bobtail are two other breeds of domestic cat with shortened tails.

The tail is an important tool to help keep kitty balanced when he walks along a fence. The cat uses the tail as a counterweight; if he looks left, the tail will move in the opposite direction.

The tail can tell us (and other animals) a lot about the cat’s current mood.

Some cats have a habit of sucking their tail. This is a throwback to infancy and is generally harmless unless done excessively, and then there may be some damage.

Some cats, especially Siamese and Burmese can be born with a kink in their tail. It’s harmless in itself and causes the cat no pain or discomfort, it is a disqualifying fault on the show bench, though. Purebred cats born with kinked tails are usually sold as pets, and not used to breed or exhibit.

It is said that the reason a Siamese cat’s tail is kinked is that a Princess of the Royal House of Siam would place her rings on the tail of the Siamese while she bathed. Some say the cat fell asleep and the rings fell off, so she tied the tail in a knot in the future. Others say the cat itself kinked his tail to stop the rings falling off. Either way, it’s a lovely story of how the Siamese came to have a kinked tail. The reality is it’s a genetic trait inherited from the parents.

Injuries and diseases of the cat tail