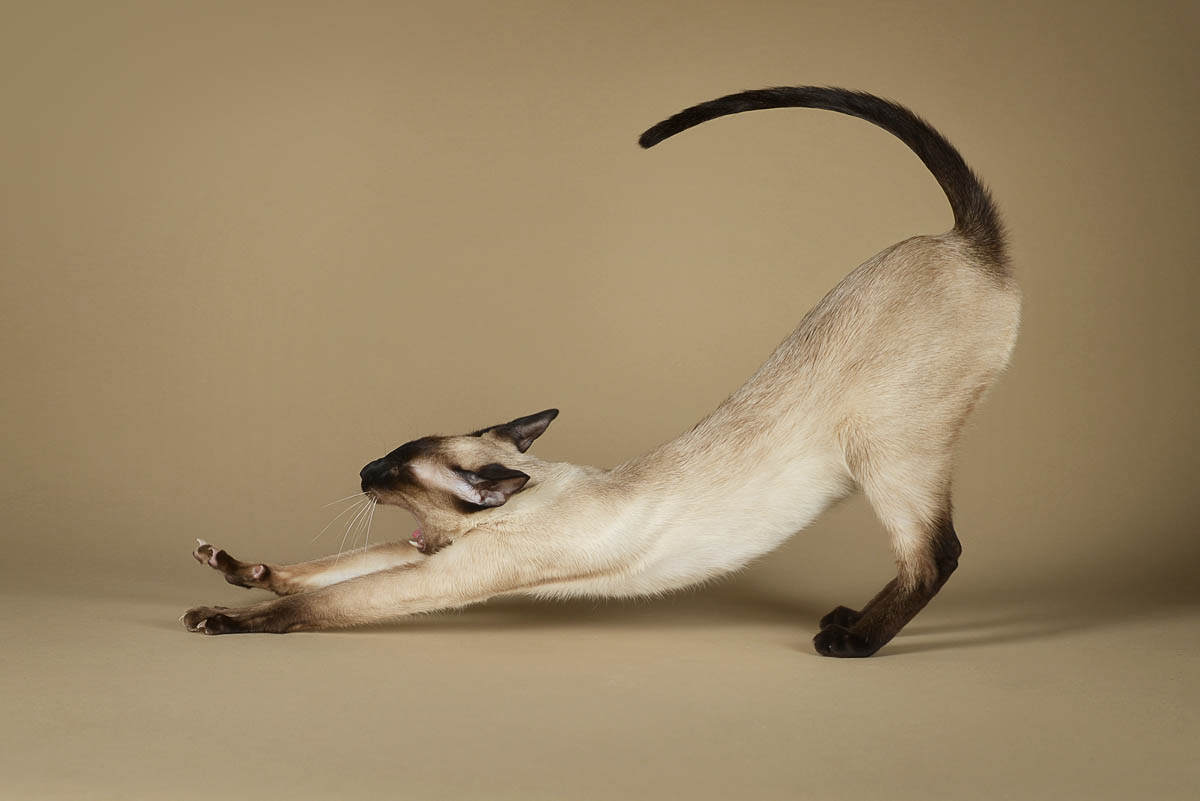 Pointed is a coat pattern that consists of dark points on the face, ears, legs and tail with a pale ivory or cream body. This unique colour combination is a form of partial albinism in which the colour is turned off on warmer parts of the body.

Some of the breeds listed only occur in pointed or are predominantly pointed, while other breeds can have a number of colour/pattern combinations including pointed. 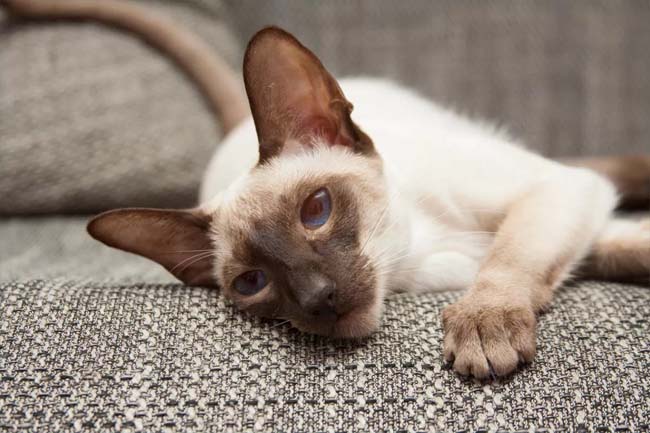 Siamese cats are derived from the Wichianmat landrace and is said to have guarded Buddhist temples. According to Sally Franklin in her book The Complete Siamese Cat, when a high-ranking person died, a Siamese was chosen to receive the dead person’s soul. The cat was removed from the royal household and sent to one of the temples to spend the rest of its days living a ceremonial life of great luxury, with monks and priests as his servants.

Acting vice-consul Edward Blencowe Gould brought Pho and Mia, the first pair of Siamese cats into the United Kingdom in 1884. Mr Blencowe Gould gifted the pair to his sister, Lilian Veley, and they are recorded as 1a and 2a in the Siamese Cat Register. Mrs Veley went on to co-found the Siamese Cat Club in 1901.

Siamese cats are a highly intelligent breed of cat who form close bonds with their human family. Their loyal personality means they need to be with their human family almost constantly and will follow you from room to room. The Siamese is known to form close bonds with one member of the family and can become jealous towards other pets and people and lonely if they are left for extended periods on their own.

Siamese cats are known to be talkers, and their deep, husky voice is different to other breeds. 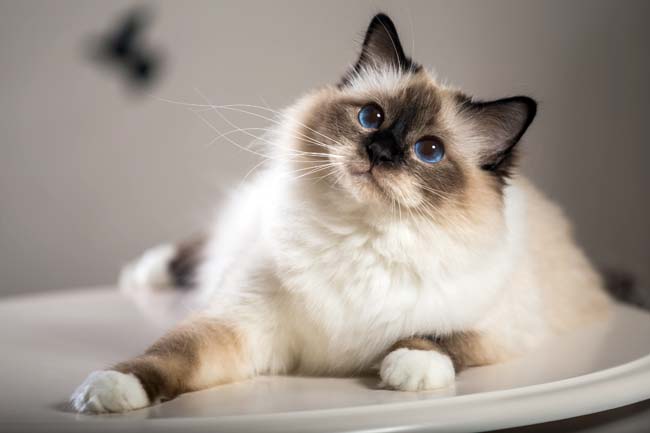 The Birman is one of the oldest cats in the cat fancy, however, there is no clear record of their history. It is commonly claimed that Birmans were companions of temple priests in Myanmar (now Birma). The first Birmans arrived in Europe in 1919, with the arrival of a pregnant female. One of her kittens, named Poupee de Madalpour (Poupee) was mated with a Siamese and is considered the founder of the modern day Birman.

The Birman is known and loved for its laid-back personality and sweet nature. Birmans love people and can form a close bond with one particular family member and will follow them from room to room.

Birman cats are smart and curious, they love to explore their environment and are quick to greet visitors to the home. Their easygoing manner makes them the ideal cat for homes with children and other pets. 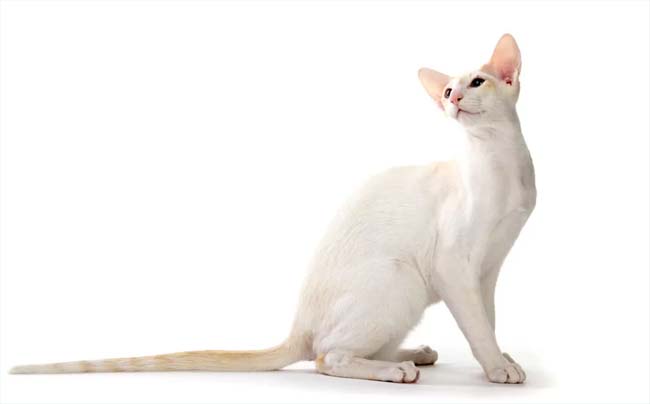 The colourpoint shorthair is essentially a Siamese in any colour other than seal, blue, chocolate and lilac. Most cat councils recognise the Colourpoint Shorthair as a Siamese, however, the Cat Fanciers Association and the World Cat Federation recognise them as a standalone breed.

The colourpoint shorthair is a highly intelligent and loving breed who forms close bonds with their human family. Their intelligence makes them easy to train to walk on a leash or play a game of fetch.

Colourpoint shorthairs can form a close bond with one member of the family and can be prone to jealousy. They thrive on routine and don’t always adapt well to changes. Like their Siamese cousins, the colourpoint shorthair is a vocal breed who will give their human family a running commentary. 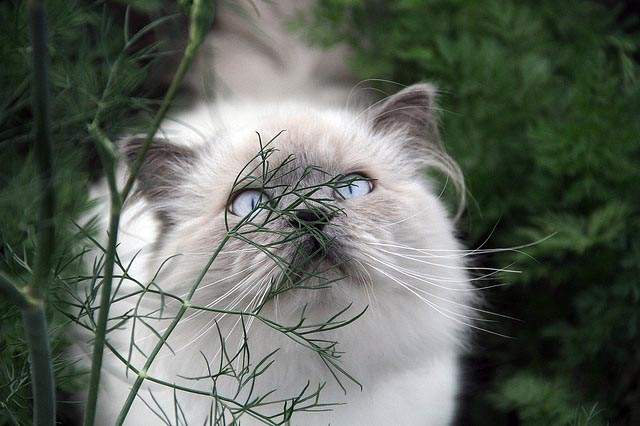 The Himalayan is a long-haired Persian, with coloured points and blue eyes. The CFA considers the Himalayan to be a Persian, while other cat registrars recognise them as a separate distinct breed.

Scientist and cat breeder Dr Clyde Keeler of Harvard Medical School and Virginia Cobb of the Massachusetts-based Newton Cattery teamed up to blend a Persian and Siamese cat. Debutante was the first true Himalayan, and Miss Cobb published an article for The Journal of Hereditary in 1936, outlining the progress of this programme.

Himalayans are a sweet, placid and good-natured breed that form close bonds with their human family but can be reserved around strangers. While they do like to talk, they are quieter than their Siamese cousins.

The Himalayan loves nothing more than to be on the lap of their chosen family, but also has a playful side too which makes them an ideal family pet. 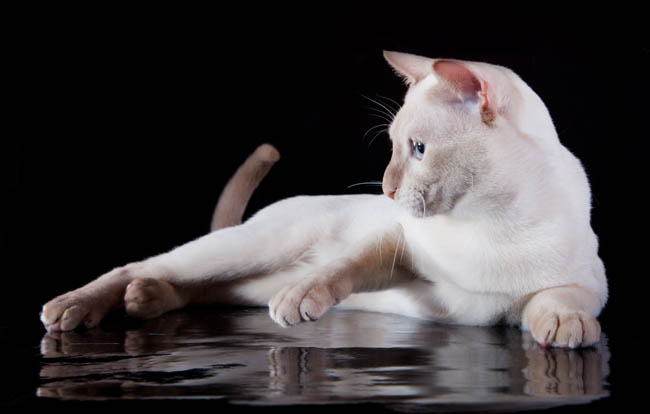 The Tonkinese is a hybrid created by crossing Burmese with Siamese cats. While the modern Tonkinese is a man-made breed originating in America, there is evidence that it has been in the West for quite some time prior. Mr Young of Harrogate is said to have brought a copper cat to England. This cat is described as a “chocolate variety of the royal Siamese cat, rich chocolate or seal, with a darker face, ears, and tail; the legs are a shade darker which intensifies towards the feet”.

Dr Robert Thompson imported the now-famous Wong Mau in 1930, who went on to become the matriarch of the Burmese. Wong Mau is the first known Tonkinese.

The Tonkinese is intelligent, playful, mischievous, friendly, and loyal who shares many traits with their Burmese and Siamese cousins.

Tonkinese cats are people-loving cats who get along with children and other pets. Their intelligence makes them easy to train to play fetch or walk on a leash. 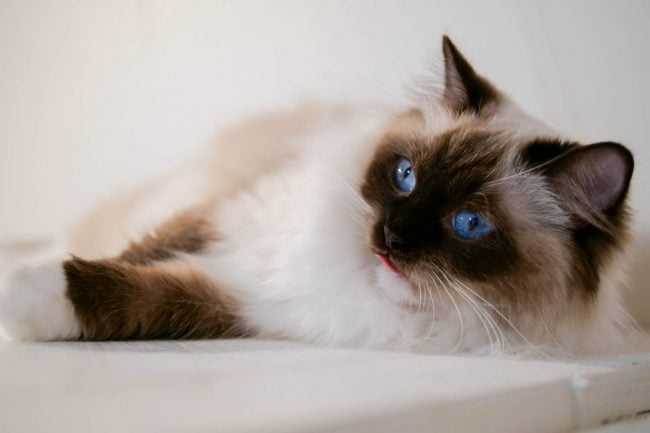 One of the largest cat breeds, the Ragdoll history begins in the 1960s with a white Persian/Angora type cat by the name of Josephine. Josephine was hit by a car, and owner, Ann Baker took her to the veterinary hospital at the University of California. Ann claimed that Josephine was subjected to government testing, which resulted in her being relaxed when picked up and no longer feeling pain. Ann noticed that the next litter of kittens were larger and all had the same laid-back temperament as Josephine.

Government conspiracies aside, Josephine had two boys to two fathers. Blackie, as the name would suggest, a black cat and Raggedy Ann Daddy Warbucks (Daddy Warbucks for short), who had a cream coloured coat, with dark points and white mitts. These two males are considered to be the founding fathers of the Ragdoll breed.

The Ragdoll occurs in four patterns:

The Ragdoll is a laid back and calm cat with a loving disposition. Despite claims made by Ann Baker that they feel no pain, this is not true. What may be the case is that they hide it better.

Ragdolls have a dog-like personality and will greet their family at the door and follow them from room to room. This is a breed that thrives on companionship and can become quite stressed if they are left alone for extended periods.

The ragdoll makes an excellent apartment-dwelling cat due to its quiet and relaxed nature. 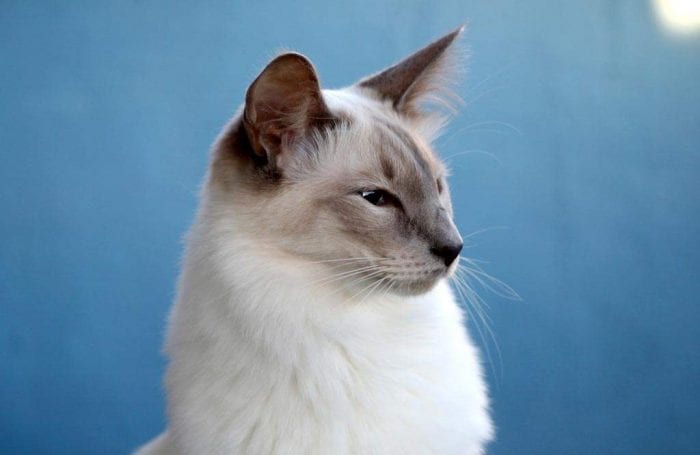 The Balinese is a longhaired Siamese who originated in the United States in the 1950s. Occasionally a long-haired Siamese would turn up in a litter of Siamese kittens, but these cats were sold as pets.  The first longhaired Siamese cat was registered with the Cat Fanciers Federation (CFF) in 1928, however, breeding these cats didn’t begin until the 1950s when Marion Dorsey of Rai-Mar cattery in California developed a breeding plan for these cats. Helen Smith of MerryMews Cattery in New York became involved in the 1960s and came up with the name Balinese. She likened the cats to the Balinese dancers. Helen was the first breeder to show Balinese cats in the AOV (any other variety) category with the Cat Fanciers Association.

The Balinese is a talkative, intelligent, energetic, extrovert, athletic cat who bonds closely with their human family. Often a Balinese cat will form a particularly close bond with one member of the family.

Balinese cats retain their kitten-like playfulness way into adulthood and should be provided with an array of cat toys to keep them amused. 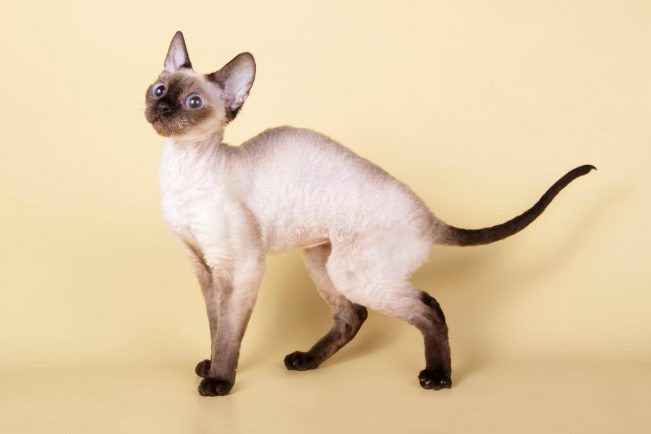 The following cats occur in a variety of colours, including pointed.