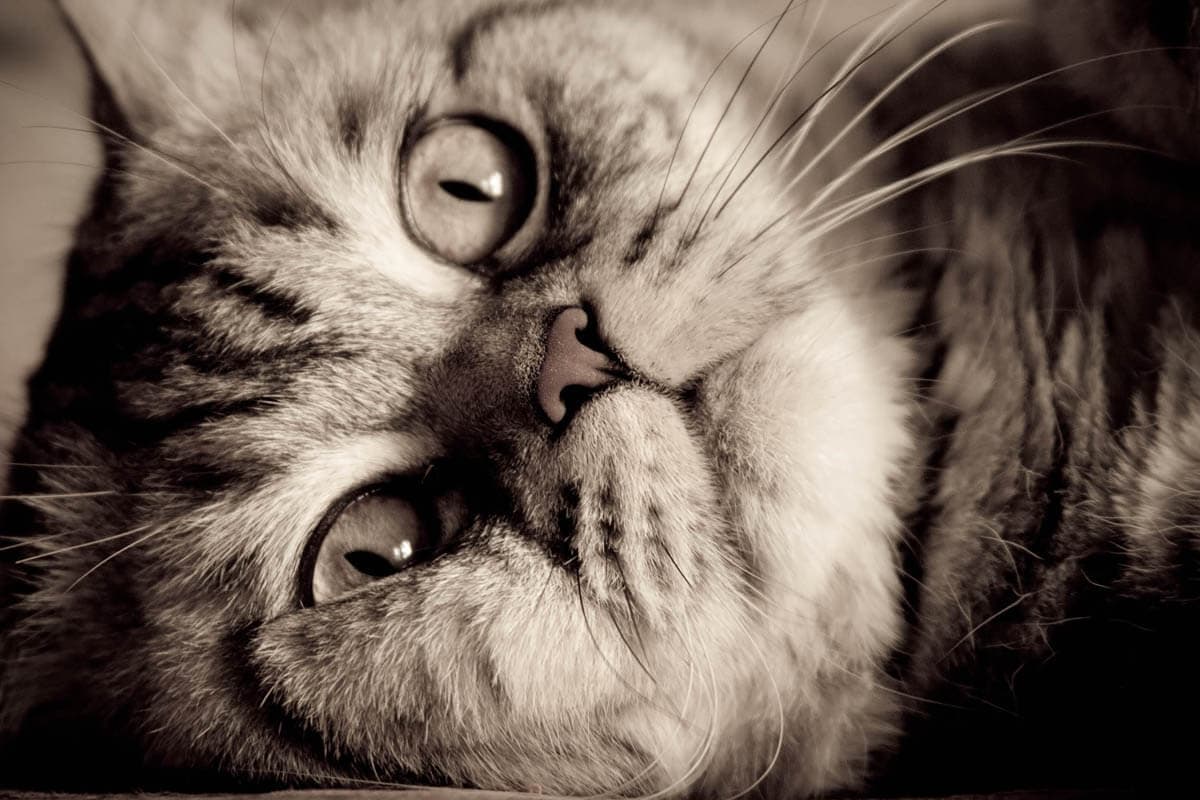 Swelling is an abnormal enlargement of the body which is typically associated with inflammation of fluid build-up (edema). The location, along with accompanying symptoms (if any) can give your veterinarian an indication of the underlying cause. Swelling can occur on any part of the body from the head down to the tail.

The location of the swelling can give your veterinarian an indication of what the problem is. Is it on one side or both? Is there an obvious wound? Does the area feel warm to the touch? Is your cat itchy? How is your cat’s appetite?

A tumour can occur on any part of the head, including the nose and ears. Symptoms include a lump, which may or may not be ulcerated.

Allergic reactions are common in cats. Symptoms include swelling, often around the mouth and eyes and itching.

Insect bites and stings present as lumps, which may or may not be itchy and/or painful. You may be able to see the bite mark or sting, depending on the size.

Cryptococcosis and sporotrichosis are fungal infections that produce hard, nodular swellings, particularly across the nose. Other symptoms include nasal discharge, skin lesions, sneezing, loss of appetite and lethargy. Immunocompromised cats are particularly vulnerable.

Paracetamol (Acetaminophen) toxicity produces edema (accumulation of fluid) in the face. Other symptoms include vomiting, difficulty breathing, lethargy, anorexia, brown coloured gums, ataxia, coma, and death. You should never give your cat human medication unless under the instruction of your veterinarian.

Snake bites will cause swelling. Snake bites most commonly occur on the face and legs of the cat. If it is a venomous snake, other symptoms will relate to toxicity to the venom such as ataxia (wobbly gait), vomiting, diarrhea, drooling and eventually coma.

Dental abscesses are the result of bacteria getting into the root of the tooth causing an infection. This usually occurs either due to a damaged tooth or advanced gum disease. Symptoms are swelling, pain, drooling, fever, loss of appetite, bad breath.

Oral cancer is a relatively rare occurrence in cats and symptoms may include swelling, drooling, loss of appetite, weight loss, and bleeding.

All of these can become swollen due to infection (viral or bacterial), eyelid abnormalities, entropion (eyelid rubbing against the eye causing inflammation), allergies, stye, foreign body (such as a grass seed) are all causes of swelling around the eye in cats.

Other symptoms may include eye discharge, excessive tear production, and pain.

Glaucoma is a buildup of pressure within the eye (intraocular pressure) causing swelling. One or both eyes can be affected. Other symptoms include dilated pupils, pain, squinting, and cloudiness.

The most common cause of ear swelling is an ear hematoma which is a ruptured blood vessel. The ear feels soft, warm and fluid-filled. Ear hematomas typically occur as a result of damage or trauma to the ear, such as when the cat has repeatedly scratched it due to ear mites.

There are all sorts of lumps, bumps, and swellings that can affect your cat’s body. An abscess is the most common cause of swelling and is usually the result of a cat fight. Intact male cats and cats allowed outside are far more prone to abscesses. Other causes of swelling include insect bites or stings, snake bites, injection site sarcoma.

A skin abscess will feel warm to the touch, is painful and may also produce fever and loss of appetite in your cat.

Insect bites or stings may be painful and/or itchy.

Snake bites will cause swelling. Snake bites most commonly occur on the face and legs of the cat. If it is a venomous snake, other symptoms will relate to toxicity to the venom such as ataxia (wobbly gait), vomiting, diarrhea, drooling and eventually coma.

Vaccinations can lead to an inflammatory response at the site of the injection leading to a small lump. This is usually harmless and goes away within a week or to, however in some cases it can develop into an aggressive form of cancer known as injection site sarcoma (or vaccine-associated sarcoma. A lump under the skin, this may or may not be ulcerated is the most common symptom.

There are a number of causes of a swollen belly in cats which include pregnancy, worms, ascites (fluid build-up), intestinal blockage, constipation, pyometra, ruptured bladder.

Accompanying symptoms can give an indication as to the cause. A pregnant cat will have pinked-up and enlarged nipples.

Kittens are particularly prone to having a “pot-bellied” appearance due to the presence of roundworms.

Ascites is caused by a number of conditions such as FIP, heart disease, liver disease or cancer. Additional symptoms may vary depending on the underlying cause.

Intestinal blockages can cause vomiting, diarrhea, lethargy, abdominal pain and weight loss in your cat. Blockages are more common in younger cats who are more prone to eating things they shouldn’t.

Constipation is caused by feces becoming impacted and dry. Common symptoms include straining to go to the toilet and the passage of small amounts of feces.

Pyometra is an infection of the uterus. It may be open, where pus is able to escape the vagina or closed, where pus remains trapped within the uterus. Symptoms may include a swollen belly, foul-smelling discharge coming from the vagina, lethargy, loss of appetite and fever.

Ruptured bladders can occur as a result of trauma (for example a fall from a great height, car accident) or due to a urinary blockage. Either way, it’s a medical emergency. Symptoms include a swollen belly, lethargy, loss of appetite, not urinating.

Breast cancer, pregnancy, and lactation, mastitis, feline mammary hypertrophy (benign tumour), mammary hyperplasia (swelling and ulceration due to high levels of progesterone either in the cycling female or due to administration of hormones).

A swollen paw is commonly caused by a foreign body such as a piece of glass, other causes include trauma (being stepped on), ingrown claw(s), nail bed infection, plasma cell pododermatitis, burns, and an insect bite or sting. Symptoms may include limping, bleeding and reluctance to put weight on the affected foot.