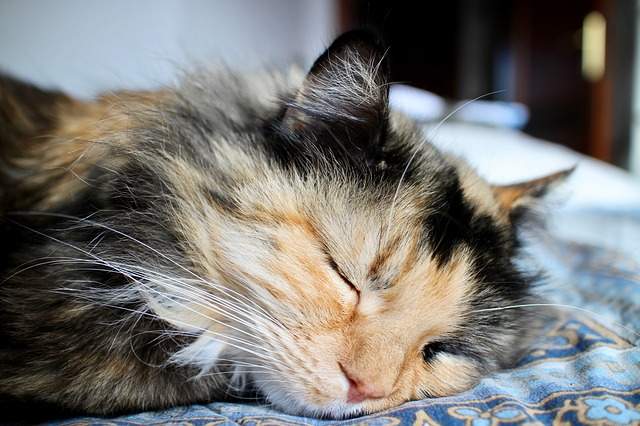 Most people who share their home with a cat are not medically trained, but pet owners are the first line of care and must always be on alert for changes which may indicate a cat is not well.

It was hard to narrow down this list to ten symptoms because there is a whole range of potentially severe symptoms omitted from this list. This article focuses on common symptoms pet owners may notice, but is by no means extensive. So, I will include additional symptoms to look for at the end of the article.

A friend recently came to me for advice on how to get her elderly cat to eat (which can be due to nausea). I asked if she was drinking and urinating more. She said ‘now I think about it she is‘. Soon after, the cat was diagnosed with advanced kidney failure and sadly didn’t make it.

Many age-related diseases develop over time, and these changes can be very small which make them hard to notice. The point of this story is not to point the finger, but it highlights the importance of watching for subtle changes which can indicate an underlying problem.

It’s easy to brush off changes as a cat who is greedy or fussiness.

Loss of appetite always has an underlying reason, which can be as simple as sudden changes in diet, dirty food bowls, inter-cat issues, but it can also be due to disease. Nausea, pain and generally feeling unwell all affect appetite. A cat who is not eating is also at risk of hepatic lipidosis, a life-threatening condition which occurs when a cat stops or reduces the amount of food he is eating. This triggers the body to use fat (triglycerides) as fuel, which is sent to the liver to be processed into lipoproteins. However the cat’s liver is not very good at processing fat, and it begins to accumulate in the liver cells (hepatocytes), overwhelming it and interfering with its ability to function properly.

Bleeding from the nose, ears, anus, blood in the stool or urine are all possible signs of internal bleeding which can be caused by blood clotting disorders or internal trauma.

Going to the toilet outside the litter tray is easy to put down to behavioural issues, but there are many medical causes too. Partial urinary obstruction, cystitis, FLUTD are common diseases which affect cats, which in turn can cause them to toilet elsewhere. Additional symptoms can include crying in the litter tray and frequent genital licking.

A urinary obstruction is a medical emergency, which requires emergency treatment. Male cats are at higher risk due to their narrow urethra. As urine cannot pass out of the body, toxins begin to build up in the body which ultimately causes organ failure.

Any lump larger than the size of a pea that has been present for longer than a month, and unexplained wounds or ulcers which don’t heal.

Lethargy or reluctance to move

Every cat owner knows how much time cats spend asleep, which can make it difficulty to spot lethargy. We must all learn our own cat’s routine and quirks which can help us to quickly spot changes.

Lethargy is overwhelming fatigue, way beyond what is normal, it can be acute (sudden onset) or chronic (slow and progressive) and there are many causes which include infection (viral, bacterial, fungal, parasitic), organ dysfunction (kidney or liver failure), constipation, pancreatitis, reduced oxygen levels in the blood, cancer, certain medications or toxins and electrolyte imbalances.

A gradual slowing down is commonly associated with aging and arthritis in particular. Arthritis is way under-diagnosed because veterinarians and pet owners put these changes down to normal aging. Additional symptoms of arthritis include stiffness, especially upon waking, reluctance to jump or climb, aggression when touched.

The occasional vomit with no accompanying symptoms can be a wait and watch situation for 24 hours, but a cat who repeatedly vomits (even if it’s once every few days) and has additional symptoms or is under 12 months of age should be evaluated by a veterinarian the same day.

Ataxia is a loss of muscle coordination (incoordination/unsteady gait). It is caused by disorders which affect your cat’s sense of motion, and it is a symptom of an underlying condition and not a disease in itself. There are three types of ataxia in cats, cerebellar, vestibular and sensory.

Ataxia is a medical emergency and requires immediate care to manage symptoms and treat the underlying cause.

The medical term for excessive thirst and urination is polyuria/polydipsia, and they both go hand in hand. Polyuria is the excessive production and elimination of urine; the cat tries to replace lost fluids by drinking more water.

Common causes of polyuria/polydipsia in cats include kidney disease, diabetes, hyperthyroidism, Cushing’s disease, acromegaly, and pyometra. All diseases are fatal if left untreated; pyometra is a medical emergency.

Paralysis is a loss of muscle function (and movement) in a part of the body due to nerve damage. It may be partial (paresis) or complete (paralysis) and can occur anywhere on the body including the limbs, face and gastrointestinal tract.

Seizures are a sudden and uncontrolled burst of electrical activity within the brain and are one of the most common neurological disorders in cats.

Mucus, puss or discharge from the eyes, nose, mouth, anus, and vagina. The most common cause is an infection such as cat flu or pyometra.