The Bengal cat is a domestic breed of cat created by crossing domestic cats with the Asian leopard cat (a small wild cat).

Bengals are active, talkative, playful, and many have a love of water. They get along well with pets and children, but pet owners must be aware this is a very high-energy breed of cat.

In 1963 Jean Sudgen of Yuma, Arizona purchased a female Asian leopard cat (Prionailurus bengalensis) named Malaysia from a pet store. Believing the cat to be lonely, she put a black domestic cat in her cage for company. The animals mated and produced two kittens, a male and a female called KinKin.

Sadly, the male was fatally mauled by Malaysia, but KinKin was safely removed and raised by a Himalayan queen. Jean contacted Cornell University, who predicted that KinKin would be sterile. This proved to be incorrect when KinKin was mated back to her father and delivered two kittens. A black female and a spotted male. Due to the sudden death of her husband, this project was abandoned.

In 1980 Jean contacted geneticist Dr Willard Centerwall who had been working on a breeding programme that involved crossing Asian leopard cats with domestic cats. This was part of a study of feline leukaemia in the hope of combatting leukemia in humans. Jean (now living in California and remarried as Jean Mill) obtained several F1 (the F stands for Filial) hybrids from this programme.

While in India in 1982 Jean and her husband came across a tailless feral domestic male living in the rhino enclosure at Delhi zoo who had markings similar to that of the leopard. Jean imported this cat (Millwood Tory of Delhi) back to the United States, and he was mated with the female hybrids. Other domestic breeds were used in the breeding programme including ocicats, Egyptian maus, Abyssinians, Bombays and British shorthairs.

The International Cat Association recognised the Bengal cat as a new breed in 1986 and awarded championship status in 1991. The Cat Fanciers Association accepted the Bengal under the Miscellaneous Class in 2016.

Body: The Bengal is a medium to large cat with a long, low-slung muscular body, and substantial boning. Legs are long and muscular with hindquarters slightly higher than the shoulders. The tail is thick with a rounded tip.

Head: The head is a broad medium wedge, with rounded contours and is longer than wide. Ears are small to medium with rounded tips and a wide base. Nose is large and wide, the bridge extends above the eyes and the muzzle is broad with prominent whisker pads. Eyes are black-rimmed, and almond-shaped they can range in colour from golden to deep green.

Coat: The spotted or marbled coat is thick, close-lying, beautifully sleek and soft feels more like a pelt than fur, the belly is whited and should also have spots. Glittering is a desirable trait.

The Bengal comes in two patterns, spotted and marbled.

Spotted: Spots should be dark and clear, with a crisp outline and a good contrast to the background colour and can be either solid or as rosettes. There are four types of rosettes: 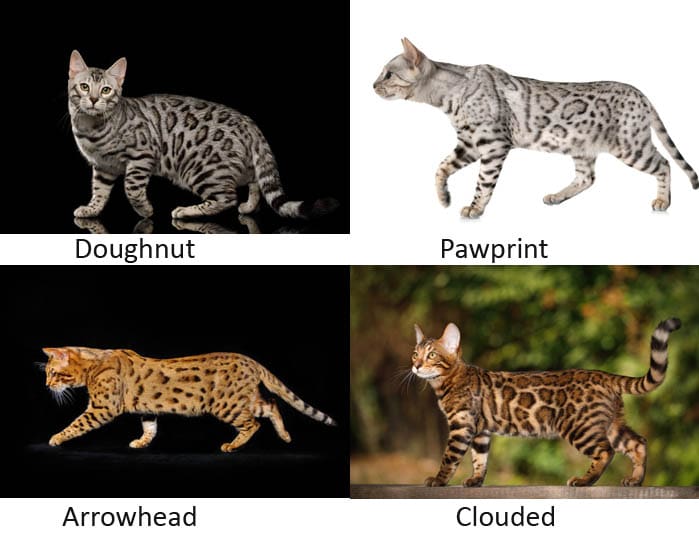 Spots and rosettes should be found all over the body, including the belly, the legs will have spots and or stripes.

Marbled: The marbled pattern consists of contrasting horizontal swirls along the side of the cat. The contrast must be extreme.

Glitter: Bengal cats carry the glitter gene, believed to have been introduced by Millwood Tory of Delhi, the kitten Jean Mill imported from India. Glitter is a recessive gene and is highly desirable in the Bengal.

The background can range in colours from brown, tawny, honey, caramel, golden, orange and sand, with dark brown to black markings. 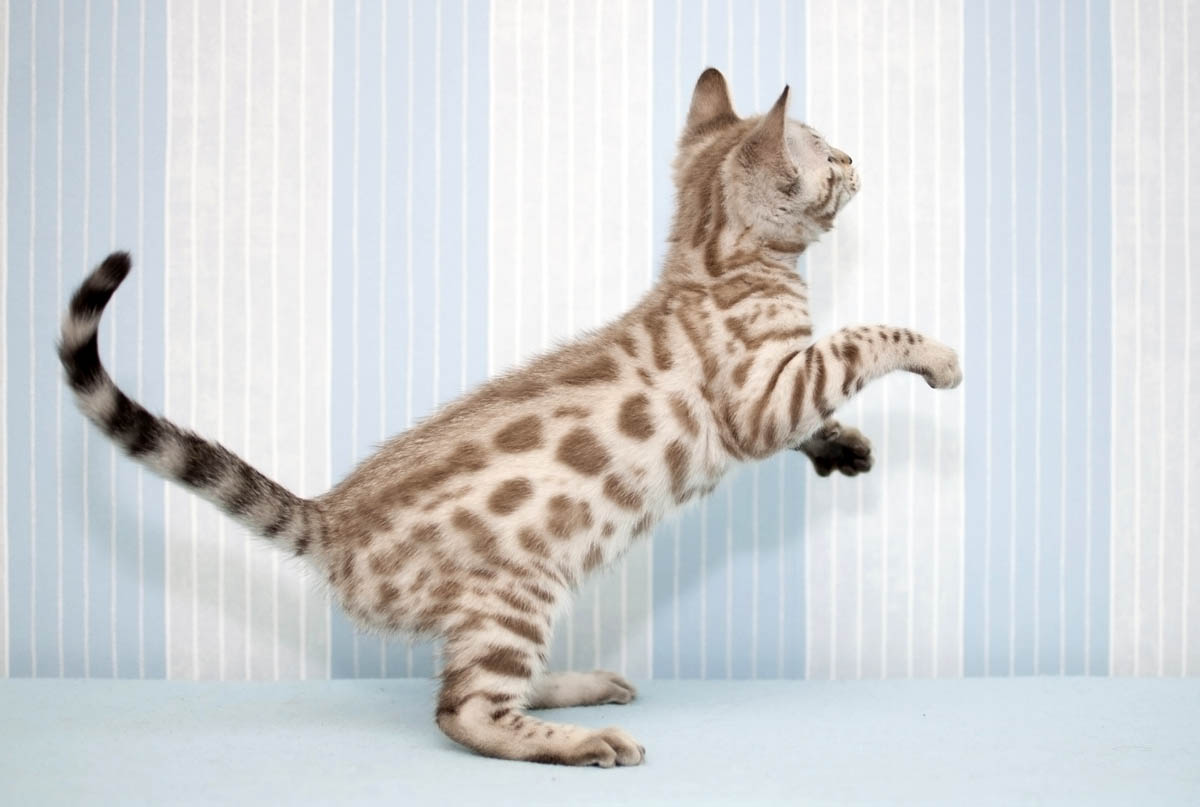 Bengals are intelligent, active, curious and energetic cats. Due to their Asian leopard cat ancestry, many Bengals have a love of water and will drink from and play with the water from a dripping tap.

Bengal cats love learning tricks and are easy to train to walk on a harness so they can enjoy the great outdoors in safety. It is always best to start harness training during kittenhood and recognise that not all Bengals will take to this.

Bengal cats remain playful well into adulthood, with an agility that sets them apart. The Bengal loves to climb and be up high and should be provided with a tall cat tree so that they can watch the world from a height. Fetch, stalking and pouncing on a wand toy, chasing toy mice are some of their favourite games. Their intelligence means they pick up new tricks quickly.

If you are out a lot of the time, we recommend two cats for company. Some Bengals can become depressed or destructive if left on their own for long periods.

Bengals and children are both active, and as such, can become great friends with each other. Where possible, look for a kitten who has been raised around children.

If you have young children, always supervise them with cats, especially kittens, toddlers are sometimes stronger than they realise and a 12-16 week old kitten is still quite small and fragile.

Some breeds of cat, including the Bengal, can have a primordial pouch. This is a loose flap of skin on the belly, just in front of the hind legs. Many pet owners mistake the primordial pouch for fat, but this is not the case. It is not entirely known what purpose the primordial pouch served, but it is thought it may be there to protect the cat’s belly (which of course houses the vulnerable internal organs) area during a fight.

Bengal cats are generally healthy but can be prone to developing the following medical conditions.

The short, close-lying coat is easy to care for and only requires a five-minute brush once a week to remove loose hairs.

Caring for your Bengal cat’s teeth is essential for good health. Clean with a pet toothbrush and paste (never use human toothpaste on cats), or you can give them human-grade chunks of raw steak or chicken necks to chew.

As with all cats, Bengals should see a veterinarian once a year for a health check-up, your veterinarian can discuss with you vaccination recommendations during the consult.

Keep the toilet seat down at all times to prevent your Bengal from trying to take a dip in the loo.

Pet insurance is recommended for new cat owners, this can take the financial strain out of unexpected veterinary bills.

Are Bengal cats hypoallergenic? Some claim that the Bengal is hypoallergenic, but no breed is truly hypoallergenic. Bengals may be better tolerated by people with allergies as they tend to shed less than other cat breeds, which means there will be less hair and dander in the environment.

Speak to the breeder if you are considering adopting a Bengal cat. Always go to their home to meet the cats and see how you cope with them.

Are Bengal cats talkative? Yes, Bengals can be extremely talkative and have an array of distinctive sounds they can make from chirping to howling and every sound in between.

Are Bengal cats aggressive? A Bengal cat should not be aggressive if it has been raised with plenty of human interaction from birth.

Do Bengal cats like to be held?  Again, this comes down to genetics and how the kitten was raised, however, Bengal cats tend to be more independent than other breeds of cat and don’t tend to enjoy being held.

Are Bengal cats good house pets?  Bengals are active, independent and extremely intelligent, they do make good house pets as long as their physical and emotional needs are met.

Are Bengal cats good for first-time owners?  They can be, but it is recommended you spend a lot of time talking to breeders, researching the breed and meeting Bengal cats. They are not your typical lap cat and if their needs are not met, they can develop unwanted behaviours.

Do Bengals shed? All cats shed, however, breeders report that Bengals shed less than other breeds.

Do Bengal cats like to be walked?  Yes, Bengal cats are an extremely active breed and love to be walked which helps them to burn off some energy and is mentally stimulating. This is not a breed that is happy to sleep on the sofa all day.