Solid coloured cats are referred to as self or non-agouti, and as the name suggests, they display a uniform coat colour with no ticking or tabby markings. Solid cats occur in three basic self-colours, which are black (B-), chocolate (bb) and cinnamon (bl). All other self colours are variations of these three base colours caused by the dilution and the dilute modifier genes. Red is not included because all red cats are tabby, and white is a lack of pigment.

The default ‘wild-type‘ coat pattern in domestic cats is tabby. This pattern consists of an agouti ground colour of alternating dark and pale bands (known as ticked) of colour along the hair shaft, as well as the tabby pattern superimposed over the ground colour to create a ticked coat with dark stripes, spots or whorls.

All solid coloured carry the non-agouti (aa) genotype, the lowercase a tells us that this gene is recessive. All cats inherit one copy of a gene from their father and one from their mother. A dominant gene is always written with an UPPERCASE letter and the kitten only needs to inherit one copy of the gene for the trait to be displayed. Recessive genes are written in lowercase, and the kitten must inherit two copies of the gene for the trait to be displayed. As the non-agouti gene is recessive, the offspring must inherit two copies (one from each parent) to have a solid coat.

The agouti signalling protein gene (ASIP) interacts with the melanocortin 1 receptor (MC1R) to regulate the switch from eumelanin (black, brown or cinnamon) to phaeomelanin (red or yellow) in the agouti (tabby cat). A 2 base point deletion in the agouti signalling protein gene causes a complete loss of the gene’s function, resulting in an overlay of the typical ticked agouti base pattern with melanic pigment, producing a uniform coat colour. Just to confuse matters, the overlaying tabby pattern is still present, however, it is not visible as the underlying coat colour is a uniform colour. Tabby markings may be somewhat visible in some cats, especially kittens, which are known as ‘ghost markings’.

Dilution (dd) is the result of enlarged and unevenly deposited pigment granules along the hair shaft, leaving some areas without pigment, this creates the illusion of a lighter coat colour. A single base deletion in the melanophilin (MLPH) gene, which provides instructions for making melanophilin, a protein found in the pigment-producing melanocytes. Melanophilin is responsible for the transport, distribution and translocation of pigment granules (melanin).

The dilute modifier (Dm) is a dominant gene that only affects dilute cats and not dense (black, chocolate or cinnamon) cats. Dilute cats with the Dm gene have a caramel cast to their coat. 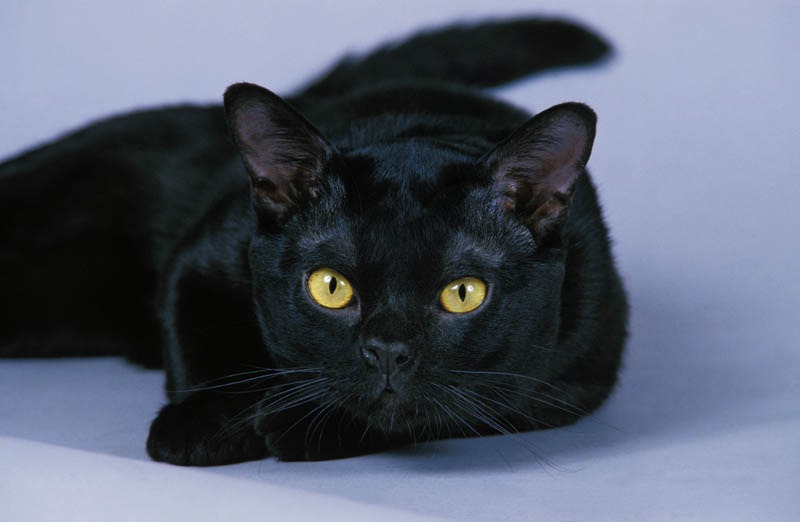 Black is produced by a combination of dense colouration as well as non-agouti and is probably the most common of the self colours. The Bombay is an all-black cat with a stunning glossy coat. 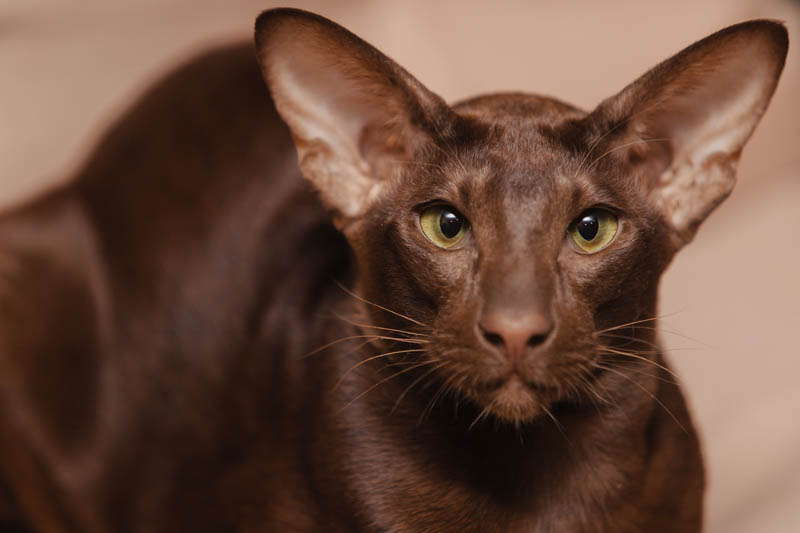 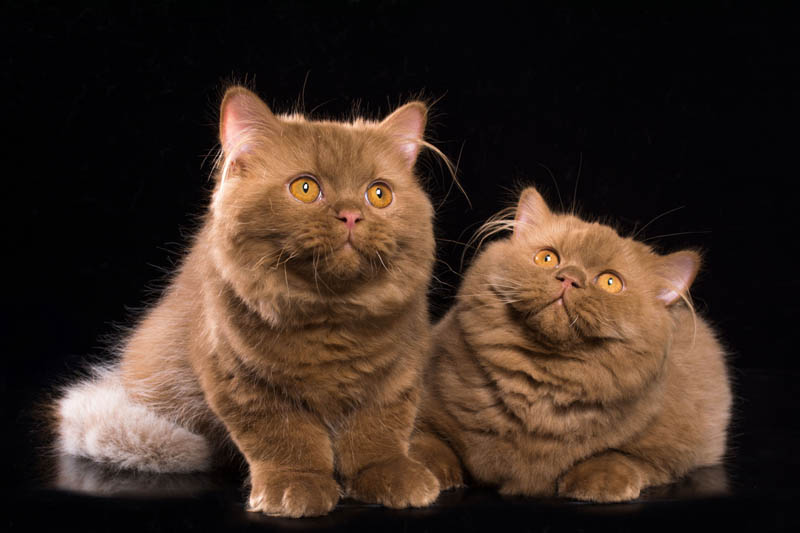 A second recessive mutation of the tyrosinase-related protein–1, (TYRP1) causes a further elongation of the granules to produce a cinnamon colour.

Grey is referred to as blue in the cat fancy and is the dilute form of black. The Russian Blue, British Shorthair, Nebelung and Korat are well-known for their beautiful grey coats, but grey is also common in random-bred cats, although less so than black. 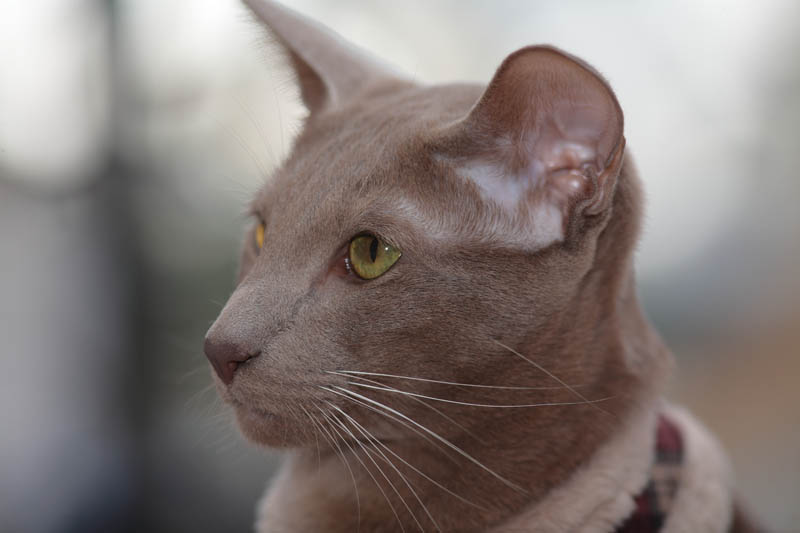 Lilac is dilute of chocolate and is one of the less common cat colours. It has been developed in a number of breeds including the Oriental Shorthair, Persian, Exotic Shorthair, British Shorthair, Devon Rex and Cornish Rex. 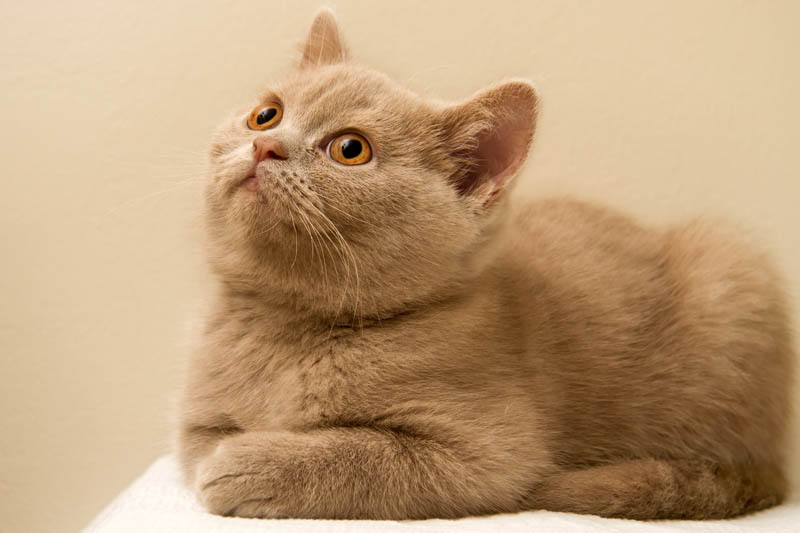 The dilute of cinnamon, fawn resembles lilac, but is slightly lighter.

Variations on self colours 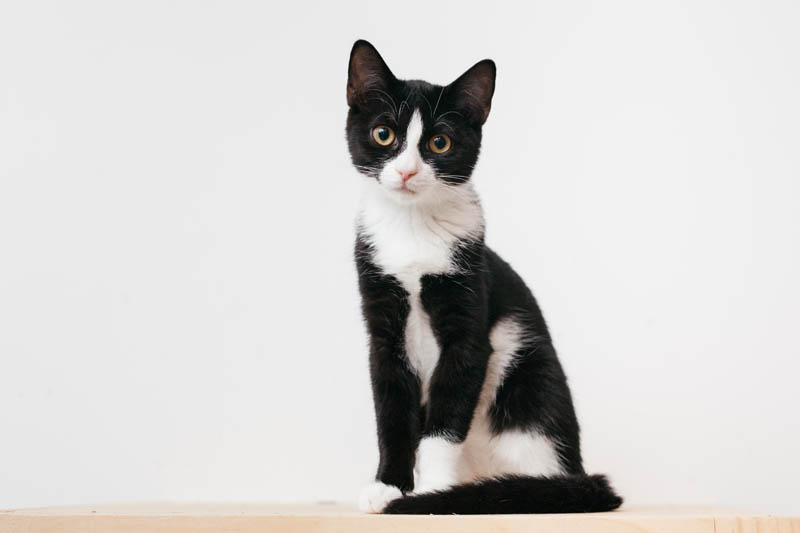 The bi-colour coat colour/pattern consists of patches of colour (solid or tabby) along with areas of white. Some cats may only display a tiny locket of white on their chest, but others may be almost completely white with a small amount of colour. A black and white bi-colour is commonly referred to as a tuxedo. 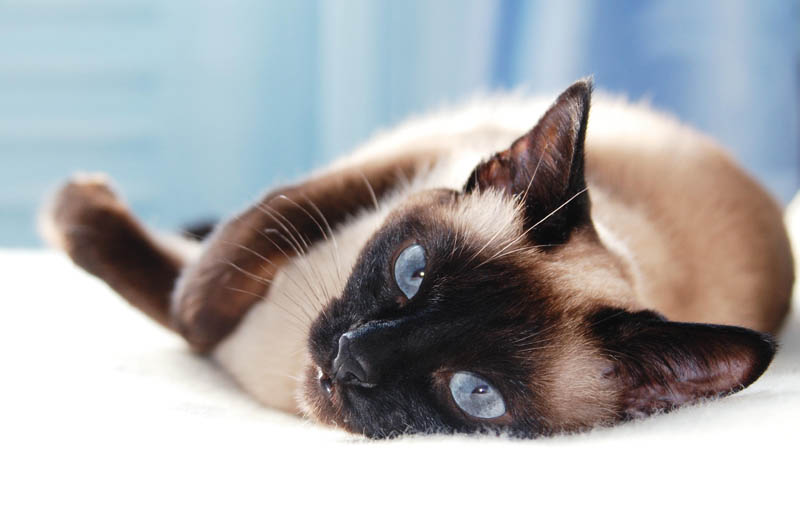 The Siamese is the most well-known of the colourpoint cats, although this pattern also occurs in random-bred cats too. Genetically, a colourpoint cat is a solid colour, however, a mutation on the C locus (a fixed position on a chromosome where a particular gene is located), resulted in a coat that is heat-sensitive. Tyrosine is an enzyme necessary for the production of melanin. Pointed cats have a defective form of tyrosine which does not function at normal body temperature. Genetically, a seal point Siamese is a black cat but due to the tyrosine defect, pigmentation can only appear on areas of the body that are cooler, such as the nose, ears, feet and tail.

Genetic mutations in cats, and what they do

Without these mutations, all cats would display the brown mackerel tabby colour and pattern of their wild ancestors.