A visit to any cat shelter will bring you nose to nose with calicos, tabbies, and torties. You’ll also find a fair number of black, white, gray, and orange felines. But… I’m willing to wager a year’s supply of kitty litter that you won’t find anything on four paws to inspire the name ‘Hershey.’

Unless you’re a breeder or a frequent cat-show attendee, you’ve probably never seen a brown cat. Among the 45 pedigreed breeds recognized by the Cat Fancier’s Association (CFA) there is only a handful of browns. 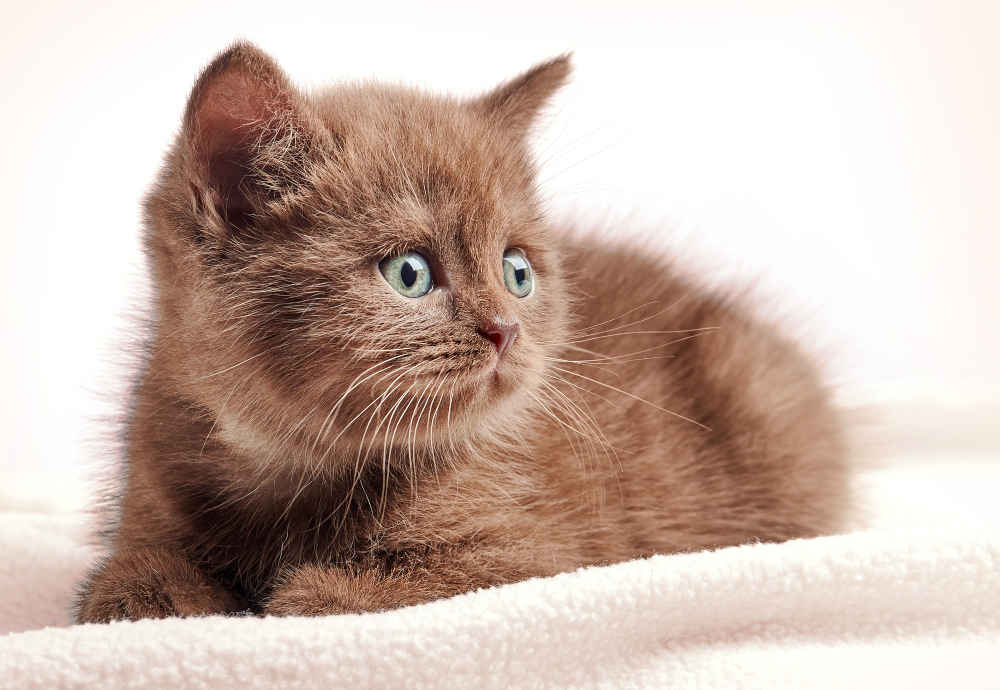 Although not standardized for competition, other felines that are sometimes included in the brown family are the York Chocolate, the Chausie, the Oriental Shorthair, and the Tonkinese.

The most well-known, and rarest, of the brunettes is the Havana Brown, whose history begins in the late 19th century when Swiss Mountain Cats were common throughout Europe and England.

In the 1920s, the Siamese Cat Club of Britain discouraged the breeding of this particular line in favor of only blue-eyed cats. Although the point is contested, an accidental (or maybe not so accidental) breeding between a solid black domestic cat and a Siamese seal-point produced a brown male kitten. This kitten, named Elmtower Bronze Idol, would become the first Havana Brown to be registered in England.

It wasn’t until the 1950s when a group of British cat fanciers set out to fix the brown color gene in the Havana Brown by successfully crossing chocolate- and seal-point Siamese with black domestic shorthairs and Russian Blues. This combination produced a feline with a rich, solid, chocolate-brown coat and emerald eyes. The striking result is a creature that has the distinction of being the only solid brown cat—they even have brown whiskers!

Unfortunately, the Havana Brown is also distinguished by being currently endangered. Cross-breeding the Havana Brown was closed off before enough breeding lines were initially established, which resulted in a shrinking gene pool. Consequently, there are too few cats and they are too closely bred, making it extremely difficult for breeders to obtain unrelated breeding stock. A conscientious breeder will adhere to high ethical standards and avoid breeding animals that are closely related. As a result, there are fewer than 1000 Havana Browns left in the world today, however, new rules regarding cross-breeding established by the CFA show great promise for the future.

Scoring on a recent list of the 21 most popular breeds in America is the Burmese. The breed first appeared in the United States early in the 20th century when an American sailor brought a walnut-brown cat named Wong Mau home from Burma as a souvenir. The cat was bred with a Siamese, and these two felines became the ancestors of all modern Burmese cats, eventually leading to the development and addition of the Bombay and Burmilla breeds.

The CFA currently recognizes both American and British Burmese in sable, champagne, platinum, and blue. Burmese cats typically have yellow eyes, but an occasional blue-eyed kitten is a stunning exception. (https://cfa.org/burmese/)  (https://www.rover.com/blog/burmese-cat/)

Although there are no completely hypoallergenic cats, the Devon Rex is the least problematic for those with sensitive noses and skin because they don’t shed very much. This is a small (six-to-nine pound) cat with huge ears, curly hair, and an elfish, or pixie-like appearance, whose capacity for love and loyalty is often likened to that of a canine. Originating in Devonshire, England, when a stray cat gave birth to the unique mutation, the Devon Rex was welcomed by cat lovers who were determined to help the breed thrive.

Today, they appear in a wide color range in solid to patterned variations, but beware—they are also known for impishly stealing food from an unattended dinner plate!

This long-haired, regal feline lounges comfortably at the very top of the most-popular list.  The Persian, a gentle companion who is perfect as an indoor pet, can compete in seven different color categories within three major divisions (solid, tabby, and parti-color) or nearly 20 color variations in the most predominant, Himalayan, category.

Since being smuggled out of Persia in the 17th century by European explorers, the white-haired Persian has dominated both the modeling and advertising industries.

Unlike most other purebred cats, the hearty British Shorthair has no specific breed-related diseases. Their ancestry can be traced back to Rome, and many cat fanciers believe the breed may have started out as simple street cats in the United Kingdom. One thing many people don’t realize about the British Shorthair is that they come in a multitude of colors and combinations of shading and patterns other than the most common, blue.

They are represented in literature by the Cheshire Cat from Alice in Wonderland as well as the character in Puss and Boots. In addition, the breed line was extended by crossing a British Shorthair with a Persian to create the British Longhair. (Brit SH https://cfa.org/british-shorthair/) (https://kidadl.com/animal-facts/british-shorthair-fact)  (https://kittentoob.com/20-things-you-didnt-know-about-the-british-shorthair/)

Perhaps the most unique of all felines is the Scottish Fold, which was developed in the early 1960s from a humble white barn cat whose ears folded forward and downward instead of standing straight up. Two Folds are never bred together because the condition is a mutation, therefore only 50 percent of the litter will inherit it. Ironically, the kittens are all born with straight ears and those whose ears are going to fold begin to do so at three to four weeks of age. The degree of folding is sorted into categories with single being just the tip of the ear to triple where the ear lies flat against the head. Those kittens who do not inherit the folding gene are called Scottish Shorthairs. (https://cfa.org/scottish%20fold/)  (https://www.rover.com/blog/scottish-fold-cats/)

How to Make Brown Cats 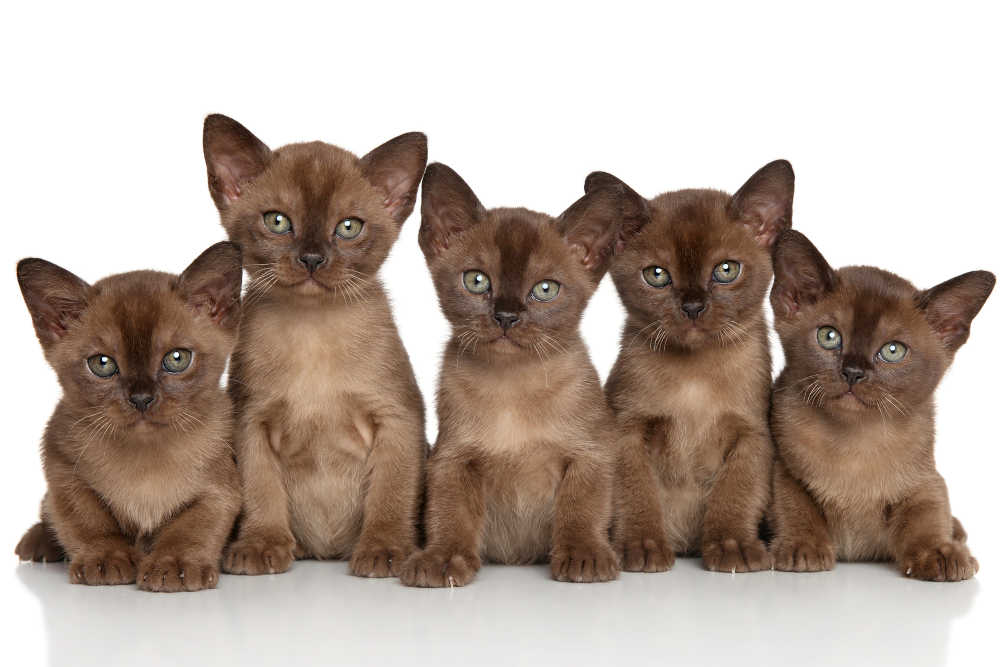 If you’ve done any painting, you know that you can make brown by mixing all the colors together. Don’t try that with cats! Their brown fur requires a very precise and unique formula.

Just like humans, a cat’s hair color is determined by the amount of melanin in their body. Melanin is a pigment that consists of two components: eumelanin, which is responsible for black or brown hair, and pheomelanin which produces red hair in people. (http://www.webexhibits.org/causesofcolor/7F.html)  As with humans, the specific proportions of these two components lie in the parents’ genes, and the particular genes needed to yield brown cats are rare.

Without getting too heavily into cat genetics, let’s just say that brown cats have inherited two copies of the recessive brown gene, one from each parent. Cinnamon is a warm brown, and is produces by a second recessive allele of B, denoted with the symbol (bl).

Scientists at the Veterinary Genetics Lab (University of California at Davis) discovered two mutations. One produces chocolate (b), and the other produces cinnamon (bl). Both chocolate and cinnamon are recessive to black (B) and therefore will only show if the cat inherits two copies of the gene.

BB x Bb (one parent is homozygous black, one is heterozygous and carries the brown gene)

Bb x BB (both parents are heterozygous black, carrying a copy of the brown gene

If a solid brown is what we’re after, there are some obstacles to overcome. Although humans may have simple genetic rules for hair color, cats have a whole slew of patterns to choose from. Calico and tortoiseshell are common specific patterns, but our feline friends can be striped, spotted, or randomly splotched!

While a strand of human hair is one uniform color from the root to the end, with only a slight variation, a feline’s hair shaft can be banded, the gene responsible for this is agouti and is recessive to non-agouti. In addition to agouti, there are three tabby genes, the wild-type mackerel, classic, and spotted. Mackerel is dominant over classic and spotted is essentially a mackerel tabby with a modifier gene that breaks up the markings from stripes into spots. 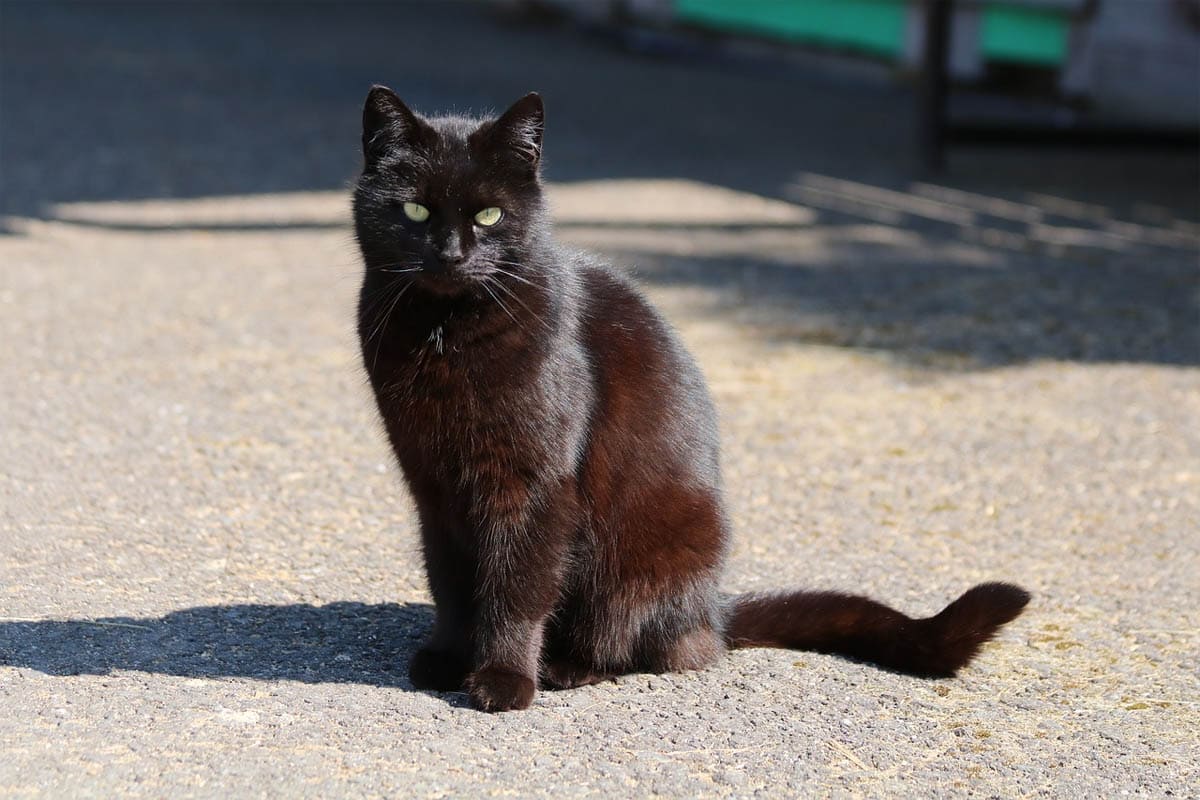 There are certain conditions under which a solid black cat may appear brown, the most common reason being sun exposure. Similar to humans, an outdoor cat, or an indoor feline who loves to sunbathe, may find their hair bleached by the sun’s intense rays. The condition is temporary, and the lush black will return once the sun exposure is limited.

Other reasons for a black cat to turn brown are dietary related, illness, and aging.

It’s important to feed your cat a balanced diet. A cat’s digestive system is very sensitive and lacking essential nutrients can cause major health problems, the least of which is brown fur.  A vet can determine whether or not your cat is getting enough tyrosine, copper, and zinc. These are the most important minerals contributing to healthy skin and hair.

The health of a feline’s internal organs, specifically the thyroid, liver, and kidney, can also affect their coat. In addition to the hair itself becoming dull, an organ functioning below capacity could make a black cat’s fur look brown.

Lastly, that brownish hue may be merely due to age, similar to a human’s hair turning gray.

The Future of Brown Cats

Since 1998, cross-breeding restrictions on the Havana Brown have been lifted. Thankfully, the breed is now more readily available. Since being bred in the United States, Havanas now come in a pinkish gray called lilac and are named simply Havana by The International Cat Association (TICA Havana).

Despite being rare, some of the brown breeds are among the most popular today. Purebred cats, however, especially if they’re brown, can carry a heavy price tag. So, if you’re in the market for a feline friend, you’ll get just as much love and comedy from one of those black and brown tabbies at the shelter.

What is a Chimera Cat?