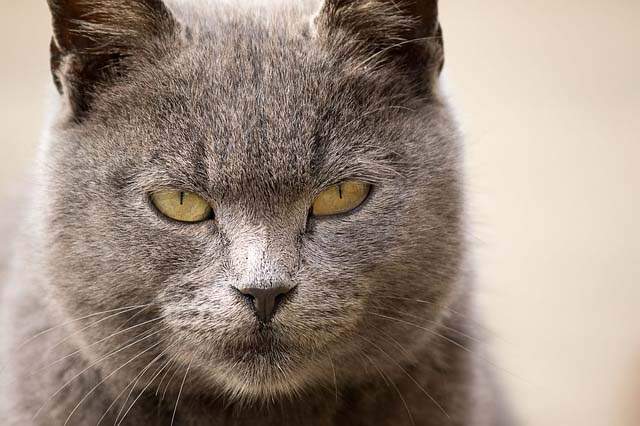 Table of Contents hide
1 At a glance
2 Accompanying symptoms
3 Causes of chronic vomiting in cats:
4 Other:
5 Diagnosis

Chronic vomiting (emesis) is vomiting which lasts for longer than a duration of three weeks. Vomiting is one of the most common presenting symptoms in veterinary practices and has many possible causes. It is easy for pet owners to rationalise vomiting as just normal because the cat eats too fast or has hairballs. The occasional vomit might not mean you need to you rush your cat to a veterinarian, but, if the cat vomits more than once a week, over 2-3 weeks, a check-up is important to find out why the cat is vomiting.

Pet owners may confuse regurgitation with vomiting, but there are differences. Vomiting is an active process, and you will see the cat’s sides heave when the cat vomits. Regurgitation is a passive process which takes no effort. Regurgitated food looks much the same as it was before the cat ate it.

Symptoms can vary depending on the underlying cause, which can give the veterinarian a clue as to the possible cause. These may include:

Causes of chronic vomiting in cats:

Causes can be split into gastrointestinal, systemic, dietary and parasitic.

One study titled Diagnosis of chronic small bowel disease in cats: 100 cases (2008-2012) found that 99 out of 100 cats had either lymphoma or chronic enteritis (inflammation of the small intestine).

Cancer of the lymphoid tissue caused by the abnormal growth of lymphocytes (a type of white blood cell). It can develop in many parts of the body, but it affects the gastrointestinal tract most often.

Can vary depending on the location, but may include:

Chemotherapy: The treatment of choice for lymphoma. Surgery may be necessary to remove a lymphoma which is causing a gastrointestinal obstruction.

A group of immune-mediated disorders affecting different parts of the intestines and can be divided into the following:

In most cases, the cause of IBD is unknown; some possible causes include genetics, hypersensitivity to bacteria, and food allergies. There is an increasing belief that a highly processed diet is a significant factor in the development of IBD.

Where possible, find and treat the underlying cause. This may include:

Food intolerance is an adverse reaction to a food or when the body is unable to break the food down (such as milk intolerance where the cat beyond kittenhood lacks the necessary enzymes to break down the sugars). It differs from a food allergy in that the immune system is not involved.

Avoidance: Where possible, avoid the food which caused the intolerances. This may either be a homemade diet or a commercial one. If you are feeding a homemade diet, it is crucial to ensure that your cat is receiving the correct nutrients in the diet.

Food allergies are the third most common type of allergy in cats (behind flea allergy and inhalant allergy). The most common causes of food allergies are fish, beef, chicken, eggs, and wheat. Cats become allergic to foods they have eaten for an extended period (usually two years or more). There is no breed, sex or age predilection. Cats with other allergies (such as inhalant) may be at greater risk of developing food allergies. There appears to be a genetic component.

The most obvious culprits are tapeworm and roundworm, which are both common intestinal worms. Tapeworms are transmitted by fleas, or infected prey (rats and mice). Cats become infected with roundworm by ingesting infective eggs in the environment or food, water, prey such as rats, mice, beetles, and earthworms or trans-mammary infection via the mother’s milk.

A hormone-secreting benign tumour of the thyroid gland. It is the most common endocrine disorder in cats and occurs most often in cats over ten years of age.

There is no cure for chronic kidney disease, and the goal of treatment is to slow down the progression of the disease as well as relieve symptoms which may include:

Diabetes is a common disease where the cells build up a resistance to insulin, a hormone necessary for glucose to enter the cells. As a result, glucose levels build up in the bloodstream as it is unable to enter the cells. The body can’t function properly if the cells don’t have enough glucose due to decreased insulin or increased resistance to it because it lacks the energy from the glucose.

Liver disease is defined as any condition which damages the liver, which leads to an inability to perform many of its vital functions. There are several causes including portosystemic shunt, tumours, toxoplasmosis, cholangitis.

Depends on the underlying cause and may include the following:

Vestibular disease is a condition in which the cat develops incoordination due to several disorders affecting the vestibular apparatus in the inner ear or brain stem. The vestibular system is responsible for providing the brain with vital information about orientation and direction relative to gravity. This information means your cat is aware if he is turning, upside down, right side up, walking, running or falling.

There are several causes which may include polyps, cancer, congenital, and idiopathic (no known cause).

The veterinarian will perform a complete physical examination of the cat and obtain a medical history from you. It will be necessary to perform several tests to find the cause. Not all cats will receive all tests obviously, baseline test results and presenting symptoms can give the veterinarian a starting point to determine which diagnostic tests are indicated.