What is a colourpoint cat?

A colourpoint cat is a cat with dark markings on the face, ears, nose, legs and tail with a contrasting pale cream background colour. This unique colour combination occurs in purebred and random-bred cats. Recently there was an interesting discussion around a photo of a beautiful pointed kitten and what breed of cat he may be. People suggested he was a Siamese, Traditional Siamese (due to his rounder head), Birman, Ragdoll, Snowshoe or Tonkinese. The cat in the image above has a similar appearance, with a rounder face and a slightly fluffier coat than that of the modern-day Siamese.

Are all pointed cats purebred or part-purebred? 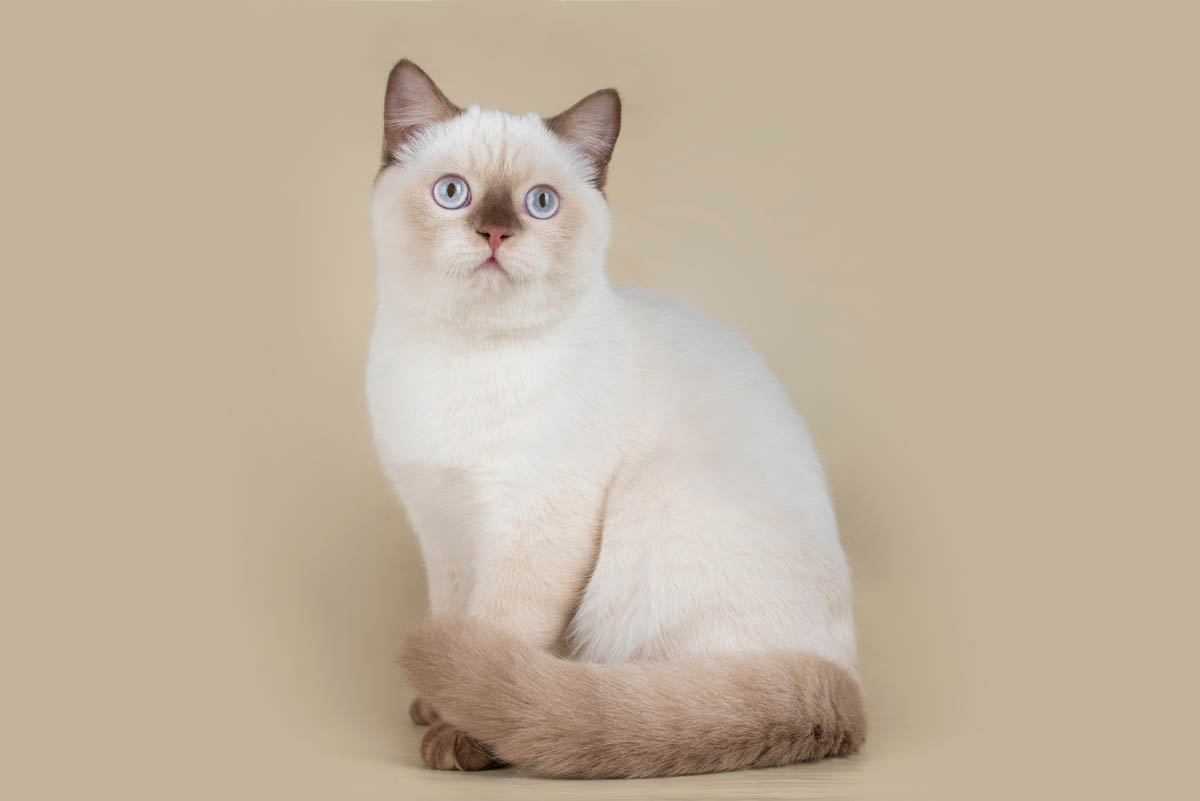 Confusion around pointed cats happens a lot because this coat colour is typically associated with purebred cats, especially Siamese, Ragdolls and Birmans. The pointed colouration did indeed originate in the Siamese cat. The gene is called Himalayan.

Siamese cats first made their way to the East in the late 1800s and from there, the Himalayan gene made its way into the general cat population. The Himalayan gene is interesting, it is a form of incomplete albinism and is heat-sensitive, meaning the cat is actually a solid colour, but the gene inactivates the production of melanin-responsible for coat colour-on warmer parts of the body, leaving only the extremities including the ears, nose, and tail darker. So a seal point Siamese is, in fact, a black cat, but the Himalayan gene has prevented the black colouration from showing on the warmer parts of the body. Pointed kittens are born all white, which makes sense because they are in a constantly warm environment in their mother’s uterus. The pointed colouration develops as the kitten matures. Pointed cats will often become darker in winter.

The pointed gene isn’t the exclusive domain of Siamese, Birmans, and Ragdolls. It occurs in many other breeds and even animals such as mice and rabbits. Some cat breeds who carry the Himalayan gene include:

The original pointed colours are:

There are additional colours, however, some cat councils choose to call these cats colourpoint. Some of these colours include:

For people who really want to find out more about their cat’s ancestry, it is now possible to order a DNA test at the UC Davies Veterinary Genetics Laboratory. Their website states the following:

Your cat’s sample will be compared to the 29 reference populations from four of the regions: Western Europe, South Asia, Eastern Mediterranean and Arabian Sea. If your cat associates strongly with one of the 29 reference populations, the information is reported. In addition, the Cat Ancestry report includes the genetics of your cat’s coat colors, fur length, and fur type.

The takeaway message here is all Siamese, Birmans and Himalayans are pointed cats, but not all pointed cats are purebred as the pointed gene has made its way into the general cat population.