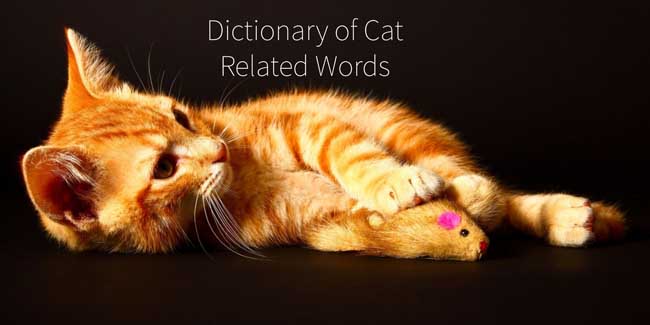 Aby – Abyssinian cat.
Agouti – The natural colouring between a tabby’s stripes.
Ailurophile – A person who loves cats.
Ailurophobe – Somebody who hates or fears cats.
Alley cat – Domestic or mixed-breed cat who lives on the streets.
Allogrooming – When a cat grooms another cat.
Alter – A desexed male or female cat.
Anestrus – The period between estrus in the female.
Ankara cat – Alternate name for Angora cat.
Anurous – Tailless cat.
Any other variety (AOV) – A registered cat which does not conform to the breed’s standard i.e. the colour of the cat is not accepted in the breed standard.
Applehead Siamese – Old-style or traditional Siamese.
Archangel cat – Old name for Russian blue cat.
Asian – A cat of Burmese type, but without Burmese markings, colouration or coat length. e.g. Burmilla, Mandalay, etc.
Atabi – The precursor for the coat pattern tabby, which originated from a type of striped taffeta (known as tabbi) that was manufactured in the Attabiah district of Baghdad.
Autogrooming – When a cat grooms itself.
Awn hair – The awn hairs form the middle coat which protect the down hairs and also insulate the cat.

Backyard breeder – A cat breeder who is not registered with a cat council and who don’t follow a breed standard.
Baculum – The bone in a cat’s penis.
Balinese – Long-haired Siamese cat.
B.A.R.F. – An acronym for biologically appropriate raw foods or bones and raw food.
Barf – Vomit.
Bastet – Sacred cat goddess of ancient Egypt.
Benching – The area where the cat’s cage is placed when it’s not being judged at a show.
Bennie – Affectionate nickname for Bengal cats.
Bi colour – A cat with two colours, a tuxedo cat is a black and white bi colour.
Blaze – White colouring on the face usually in the shape of an inverted V.
Blep – When a cat accidentally leaves its tongue out.
Bloodline – Pedigree of a cat, the feline equivalent of a family tree.
Blotched tabby – A type of tabby pattern consisting of wide dark bands arranged in whorls and spirals on the sides of the body.
Blue – Colour used to describe a cat’s coat. Blue is the dilute of black and appears as a grey/slate colour. This varies from cat to cat and breed to breed.
Boar – An old term for an entire male.
Boarding cattery – A establishment where cats are cared for when their owners are away.
Brachycephalic – Short-nosed cats such as Persians and Exotics.
Break – The indentation of a cat’s nose.
Bred – Mated.
Britches – Longer hair on the back of the upper hind legs.
Breed standard – A a set of guidelines covering specific externally observable qualities such as appearance, movement, and temperament for particular breed of cat.
Bunny cat – An early name for the Abyssinian cat.
Bunting – Head butting people or objects (walls, chairs etc).

Calico – Tortoiseshell and white cat.
Calling – The sound a female cat in heat makes.
Carthusian cat – Early name for the Chartreux cat.
Caterwaul – The noise made by courting cats.
Cattoo – Tattoo of your cats. Hayley.
Catupuncture – The beclawed kneading of your bare skin by a cat intent on increasing both its wellbeing and yours. Gemma.
Chattering – A behaviour some cats exhibit when they see a bird or other animal through a window. The teeth move up and down quickly and the cat makes a muffled meow-like sound.
Champagne – Buff cream coat, dilute version of the sable coat colour in Burmese cats.
Chinchilla – A longhaired Persian cat with silver or gold tipped fur.
Cinnamon – Coat colouration which is reddish-brown.
Copper cat – Old term for Burmese cat.
Clowder – A group of cats.
Colourpoint – A cat with pointed colouration on the nose, ears and extremeties (such as the Siamese).
Cobby – A stocky body type, such as that of the British Shorthair.
Crepuscular – An animal who is active at dusk and dawn (cats are crepuscular).
Cymric – Long haired Manx cat.

Dam– A mother cat.
Declawing – Surgical amputation of the cat’s claws up to the first joint of the toes.
Digitigrade – The way a cat walks, on its toes.
Dilute – A lighter coat colour variation of a cats primary colour controlled by the Dilution alleles. i.e., Black becomes blue, chocolate becomes lilac, Cinnamon becomes fawn, and Red becomes cream.
Direct register – The way a cat walks with the hind foot landing in the same spot as the front foot which reduces tracks and noise.
Doe cat – Early name for a female cat.
Domestic – Cat of mixed ancestry (ie; a moggy).
Drain cat – Name given to the Singapura cat.

Ear furnishings – Hair tufts of that grow around and in the ears.
Ear tufts – Longer hair which grows on the top of some cats, including the Maine Coon.

FeLV – Feline leukemia virus.
Feral cat – A domestic cat which was born in and has always lived in the wild.
FIV – Feline immunodeficiency virus.
Flehmen – A behavior in which the cat curls back its upper lip exposing its front teeth, inhales with the nostrils usually closed and then often holds this position for several seconds.

Gib – Old word for entire male cat.
Grimalkin – The name of a female cat, especially an older one.

Haws – The cat’s third eyelid.
Hemingway cat – A polydactyl cat (a cat with extra toes).
Henry’s pockets – The flap on the outside of a cat’s ear (medical term is cutaneous marginal pouch).
Heterochromia – Different coloured eyes (blue and yellow) or two colours in the one eye.
Hybrid – A cross between two breeds, for example, Burmese and Abyssinian.

Kibble – Dry cat food.
Kindle – Kittens born to the same mother.
Kneading – A behaviour in some cats who use their front paws to push in and out in an alternate fashion on a blanket, human or their mother’s belly when they are nursing.
Kucinta – A Singapura cat.

Locket – A white spot of colour on a cats coat at the base of the throat, often a fault.
Longie – The tail on a Manx cat which is longer than the previous three types, rumpy, rumpy riser and stumpie, but shorter than the average tail on a cat.
Lynx Point – Another name for the coat pattern in cats called a tabby point. See tabby.

Neuter – Castration (removal of the testicles) of a male cat or a castrated male cat.

Pedigree – A purebred cat or a document of a purebred cat’s lineage.
Pet quality – A purebred cat who varies from the breed standard, which is usually a minor flaw such as a kinked tail or slightly different eye-colour.
Polydactyl cat – Cat with more than the usual number of toes.
Primordial pouch – The loose pocket of skin on the belly, just in front of the hind legs.
Purebred – A cat whose ancestry contains only individuals of the same breed (Siamese, Abyssinian, Burmese etc).

Ram cat – An old term for an entire male
Rex cats – Several breeds of cat with soft, curly fur which includes the Devon Rex and the Cornish Rex.
Rumpy – Manx cat with no tail.
Rumpy riser – Manx cat where a small number of tail vertebrae are present.

Seal point – Coat colour consisting of a pale body with dark brown face, ears, tail and legs.
Scruff – The loose skin on the back of a cat’s neck.
Scruff – A way to immobilise a cat by grasping the skin on the back of a cat’s neck (not-recommended).
Self-coloured – Cats who are entirely one colour.
Sepia – A coat pattern in cats controlled by the sepia alleles (cb/cb). e.g. Burmese. A cat with these alleles has slightly thermo-liable tyrosinase and thus results in a coat pattern that has normal pigmentation on the tail, legs, face and ears, and slightly lighter coat pigmentation on the body. The sepia alleles (cb/cb) are the least thermo-liable tyrosinase of cats from the Himalayan series. See Himalayan Series.
Shaded – Coat pattern which is made up of pale hairs with a dark tip.
Shell – Coat pattern which is made up of pale hairs with dark lips.
Show-quality – A pedigree cat who is an outstanding example of the breed and meets the breed standard closely.
Sire – A father cat.
Smoke – Coat colour which is pale underneath and darker at the tips.
Solid – Cats who are entirely one colour.
Somali – Longhaired Abyssinian cat.
Sorrel – Coat colour which is made of a brownish-orange to light-brown which is seen in the Abyssinian cat.
Spay – Removal of a female cat’s uterus and ovaries or a spayed female cat.
Stropping – When a cat sharpens its claws.
Stud – Entire male cat.
Stumpy – Manx cat where the tail is longer than a rumpie or rumpie riser but deformed.

Please post below or email me if you have any cat-related words to add.