White is an eye-catching coat colour that is found in both random-bred and purebred cat populations. Eye colour can be blue, green, yellow or odd. While not uncommon, white is seen less frequently than tabby, solid or bi-colour.

White can be due to the white spotting gene which can range from almost all white to just a locket, dominant white, or albinism.

White spotting and dominant white were thought to be separate genes, but they are both on the KIT gene. Anecdotal evidence suggests that cats who are homozygous (ie: have two copies of the  WS gene) will display more white than heterozygous cats. A full 7125bp insertion results in white spotting while a partial insertion causes dominant white. Feline endogenous retroviruses are ancient viruses that have integrated into host germline cells (egg and sperm) and make up to  6-10% of the cat’s genome. Several types of endogenous retroviruses are present in domestic cats, however, there is no evidence they are infectious.

True albinism is rare in cats and unlike white spotting or dominant white, which masks the effects of colour, the albino cat completely lacks pigmentation.

Are all white cats deaf?

No, this is not always the case; however, a lot of white cats with blue eyes are. Hearing loss in white cats with blue eyes is a form of congenital deafness medically known as unilateral or bilateral congenital sensorineural deafness. Dominant (epistatic) white is a masking gene that overrides all other coat colours. Affected cats could have an underlying coat colour, but the WD gene completely suppresses its expression resulting in white fur.

The WD gene is pleiotropic (a gene that has different effects), and exhibits complete penetrance for the absence of coat pigmentation by disrupting replication and migration of pigment cells known as melanocytes into the hair, and incomplete penetrance for hereditary deafness and iris colour. Cats can have odd eyes (one blue and one yellow or green), or both eyes can be the same colour (blue, yellow or green). Deafness can occur in one ear, both ears, or in some cases, suffer partial hearing loss.  Felines with unilateral deafness are always deaf on the same side as the blue eye.

The eyes of a white cat may be blue, non-blue (usually copper or gold) or odd (one of each). Blue-eyed cats are more often deaf than white cats with other coloured eyes. This occurs during fetal development, after conception, the embryo splits into three primitive germ layers:

As you can see, the ectoderm forms the pigment cells and the eyes and ears. It seems in blue-eyed, white cats; there is a developmental fault in the ectoderm which results in deafness.

If a cat with odd eyes is deaf, it is always on the same side as the blue eye.

Deafness is more likely to occur in white cats with blue eyes; however, that is not guaranteed. A survey of 185 white cats reported the following results:

The gene responsible for albinism is different to dominant white WD. Albino cats are generally not deaf. There are five known albinism alleles in cats; full colour (C), Burmese (Cb), Siamese (Cs), blue-eyed (part) albino (c/a) and pink-eyed albino (c/c). Whenever you see a letter in capital form, it is a dominant gene; lower case is recessive.

Albinism occurs because the coat contains no pigment cells (melanocytes), whereas non-albino white cats have the “normal” number of melanocytes, but they have been masked by the W gene.

How do I know if my cat is an albino?

The most reliable method to differentiate a white cat from an albino cat is to look at eye colour. Albino cats will have pink or pale blue eyes due to a lack of pigmentation, whereas dominant or white spotted cats will have dark blue, yellow or green eyes. The iris contains pigment to regulate the amount of light which passes through the lens and to the light-sensitive retina at the back of the eye. True albinos are sensitive to light due to the lack of pigmentation. The pale blue or pink hue in the albino cat’s eyes is the reflection of light mirroring the blood vessels in the back of the eyes.

What makes white cats so special?

The combination of their uniqueness, accounting for just 5% of the cat population, pure white coat along with large, expressive eyes makes for a truly special cat.

White is popular among cat lovers and occurs in random-bred as well as purebred cats. The Foreign White is the only breed that only occurs in white, the Turkish Angora allows several colours, however, white is the most prized. Other breeds allow white in their breed standards. 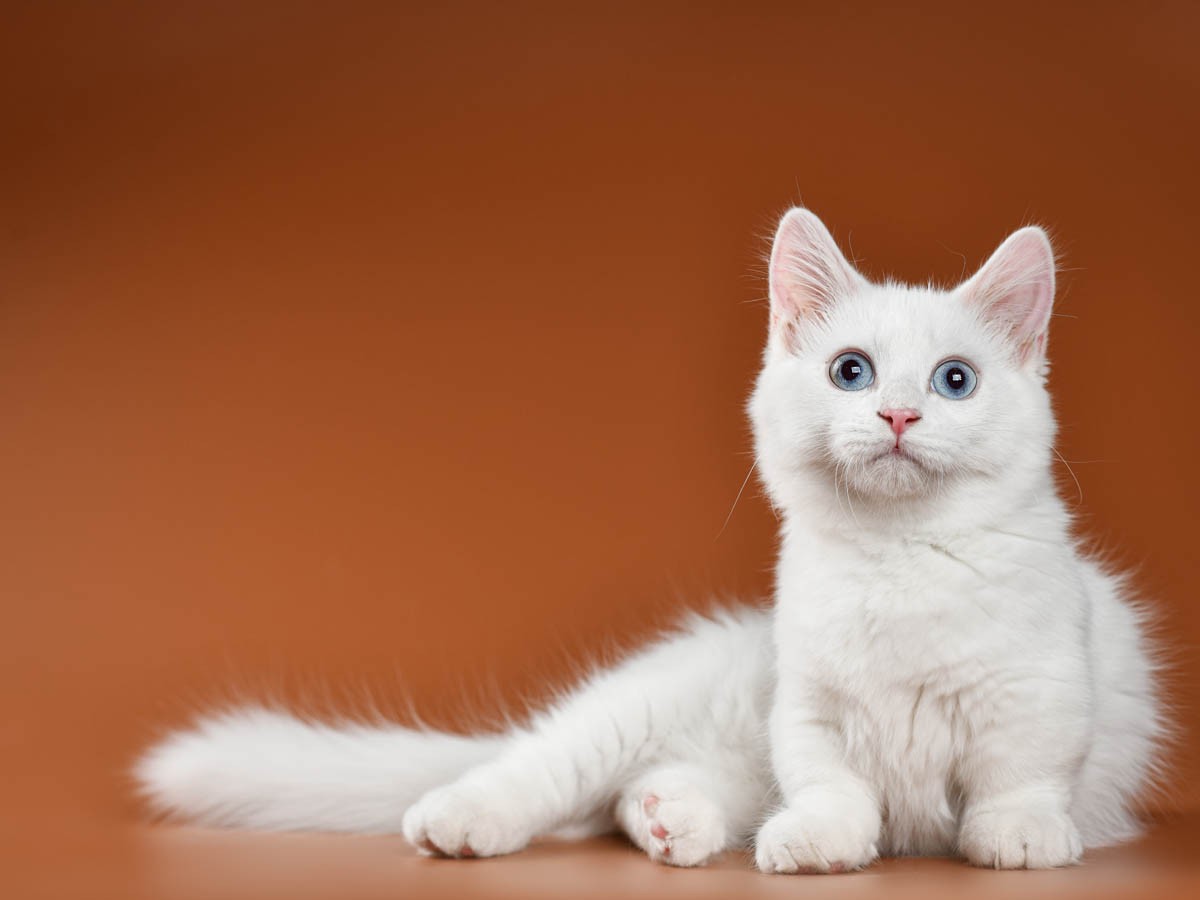 If you suspect your cat might be deaf in one or both ears, your veterinarian can organise a BAER test. This stands for brainstem auditory evoked response and detects electrical activity in the cochlea and hearing pathways.

Caring for a white cat

White cats are at greater risk of sunburn and developing skin cancer. Not only that, but their deafness puts them at even greater risk of predators and cars. They should only be allowed outside in an enclosure or on a leash.