What is a DNA test?

A DNA test is a test on the cat’s deoxyribonucleic acid (DNA) which carries genetic instructions for the sex, development, growth and function of cats. In some cases, it can also trigger disease or congenital defects. DNA is found in the cells of all living things and is located within the nucleus of every cell.

Pet owners may choose a DNA test to determine a cat’s ancestry or more importantly, obtain information about a cat’s risk of disease.

What do DNA tests detect?

Several companies now provide DNA tests for cats, each one offering a different variety of tests.

A feline DNA test can provide information on the following:

All cat breeds descended from the African wildcat felis silvestris lybica, as they spread throughout the world, different populations emerged. For example, cats in Northern Europe developed long, thick coats which helped them to survive the harsh winters. Each of these populations of cats has slightly different markers. The UC Davies has developed a test which compares a cat’s DNA with eight populations of cats around the globe.

The sample DNA is compared to 29 cat breeds on the database and can provide information about how much DNA your cat shares with common cat breeds.

Mackerel tabby (uppercase A for agouti) is the wild-type coat pattern but over centuries, mutations have occurred which have lead to the varied coat colours and patterns we see now.

The dilute gene affects the distribution of melanin granules within the hair shaft and changes black to grey, chocolate to lilac, red to cream and cinnamon to fawn 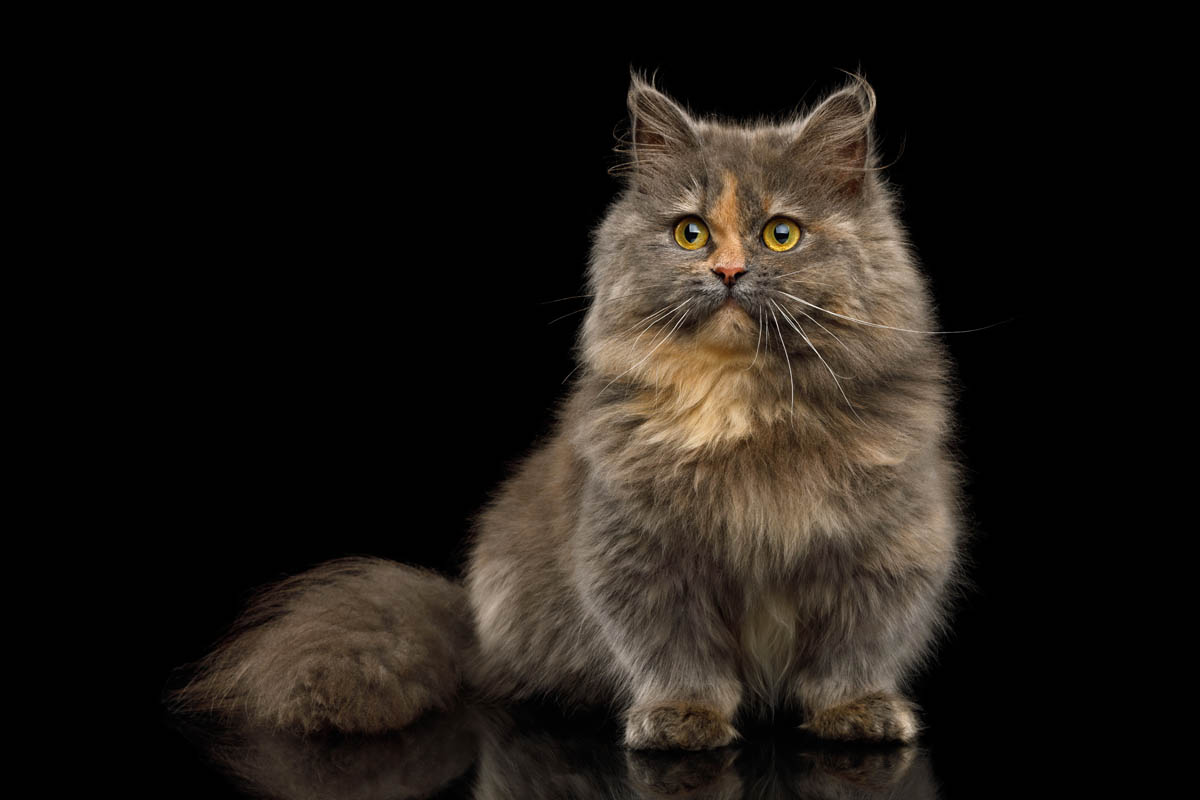 The gene for long hair is recessive, which means the cat must carry two copies of the gene (one from each parent) for the trait to show. It is possible for a shorthaired cat (we will use an uppercase S to show that it is dominant) to carry the longhaired gene (characterised by a lowercase s, which signifies it is recessive). So genetically, the shorthaired cat carrying the longhair gene would be Ss (remember, each cat carries two genes, one from the mother and one from the father.

Shorthair is the default coat type in cats, however, mutations have occurred which have changed the coat, these include longhair, hairless and the rex mutations most commonly associated with the Devon Rex and Cornish Rex.

A DNA test can identify inherited diseases which enable the veterinarian and owner to take early intervention and provides purebred cat breeders with the opportunity to remove high-risk cats from the breeding pool.

Diseases which can be tested for via DNA analysis include:

This test profiles the cat’s DNA to verify parentage, which is useful information for cat breeders to confirm a sire and dam of a cat or litter of kittens.

Cats have three blood groups, A, B and AB. Blood grouping is particularly important for cat breeders to prevent neonatal isoerythrolysis, a is a serious and life-threatening condition caused when kittens who have type A blood nurse from their mother who has type B blood during the first 24 hours of life. The queen’s first milk is known as colostrum contains naturally occurring alloantibodies against the kitten’s type A blood group.

Orivet offers a full breed profile which evaluates all diseases and traits such as coat colours and patterns, dilute, agouti etc., which are relevant to a particular breed.

How is a DNA test performed?

Most DNA tests require a sample of cells from the cheek (buccal swab). This quick and easy process can be carried out at home. Blood and hair samples may be used with some DNA testing facilities.

How much do cat DNA tests cost?

The cost varies between companies as well as what information is being looked for, prices start at $100.

How long does it take to get the results?

The results of a cat DNA test can take anywhere from six to ten weeks.

Should I have my cat DNA tested?

DNA testing can be a fun way to find out your cat’s ancestry, but more importantly, it can assess the risk of certain inherited diseases. For example, women who carry the BRCA1 or BRCA2 gene have a considerably higher risk of developing breast cancer and cats who carry certain genes have an increased risk of inherited diseases. Knowledge is power and knowing that a cat has an increased risk of certain diseases can help to prepare and make the necessary changes to slow down the progress or be on high alert.

For most pet owners, knowing a cat’s ancestry can be fun but is not necessary. However, this information for breeders can be vitally important to prevent mating cats who carry genetic mutations which can cause disease, or selecting or eliminating cats who carry certain genes which carry physical traits such as hair length, coat colour or type.