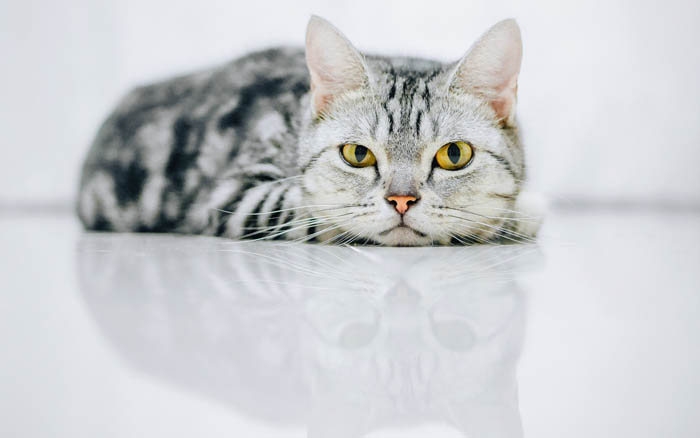 Tabby is a common coat pattern among domestic cats which features an agouti pattern of alternating dark and pale bands of colour along the hair shaft with contrasting darker spots, stripes or sworls and a prominent M on the forehead. The tabby cat is not a breed, but a coat colour which can be found in both mixed breed and purebred cat populations.

The tabby gene is known as agouti and produces a background which is made up of individual hairs that have alternate banding (ticking). Agouti hairs are most obvious on the ticked tabby (such as the Abyssinian or Singapura) who only has the agouti background but not the stripes, spots or sworls.

The agouti gene (symbolised with an uppercase A) is dominant over almost all other coat colours with an exception for the white masking and white spotting genes.

The name tabby is believed to have derived from Atabi, which is a type of striped taffeta (known as tabbi) that was manufactured in the Attabiah district of Baghdad in the Middle East.

Harrison Weir, in his book Our Cats And All About Them, dated 1889, describes the origins as this:

The word tabby was derived from a kind of taffeta, or ribbed silk, which when calendered or what is now termed watered, is by that process covered with wavy lines. This stuff, in bygone times, was often called tabby: hence the cat with lines or markings on its fur was called a “tabby” cat. But it might also, one would suppose, with as much justice, be called a taffey cat, unless the calendering of “taffey” caused it to become “tabby”. Certain it is that the word tabby only referred to the marking or stripes, not to the absolute colour.

The agouti gene is dominant; the code for this gene is A/a (a capital letter symbolises that the gene is dominant, a lower case letter means the gene is recessive). If a cat inherits two recessive a genes, then it will be a non-tabby (solid) cat as the presence of the a/a masks the tabby pattern.


Genetically all cats are tabby, however, many possess modifier genes which inhibit this pattern from being expressed. The mackerel tabby (Mc) is the default (wild type) pattern, with the classic pattern being recessive (mc). Recessive genes require two copies (one from each parent) to be expressed. The spotted tabby is essentially a mackerel tabby with a modifier gene which breaks up the markings from stripes into spots.

If cats were allowed to do their thing (so to speak), and no more selective breeding occurred, then cats would eventually revert back to the default tabby pattern after a few generations, which is known as revert to type.

Specific breeds have variations of the four tabby patterns, the Sokoke coat pattern consists of a modified classic tabby, and the Bengal coat can consist of marbled, arrowhead, pawprint, doughnut and clouded, the latter three are variations of the spotted pattern.

Sometimes it is possible to see a glimpse of the tabby markings on solid cats, which is referred to as a ghost tabby markings. They are most commonly seen in kittens and usually disappear as the cat matures.

The tabby pattern occurs in twelve colours which are black based or red based and their dilutes and dilute modifiers which change the shape of the melanin granules or make them clump together.

Other colours include cream tabbies and blue tabbies.

Also known as blotched or marbled, the classic tabby consists of clearly defined markings, on a lighter background. The darker markings can consist of lines, swirls, and whorls which are unbroken on the top of the cat and swirled along the sides, with a distinctive mark on each side which resembles a bullseye.

Clearly defined, vertical stripes going around the cat’s body. Mackerel stripes are narrower than those on the classic tabby. Legs have bracelets, and the tail is barred.

Dark spots on a lighter background.

The ticked tabby has contrasting dark and light bands of colour on each hair.

Why do tabby cats have an M on their forehead?

All tabby cats, have stripes running down the forehead and cheeks with a characteristic M on the forehead. There are several legends as to how this occurred:


The Singapura has additional stripes which run from the inner corner of the eyes down to the whisker pads, which are known as cheetah lines.

There are several cat breeds which accept the tabby cat pattern, the tabby pattern is also common among domestics.

The tabby pattern can also occur in pointed breeds of cat such as the Siamese, Colorpoint Shorthair, Himalayan, Balinese, Birman and Ragdoll (tabby or lynx point).

How can I tell if my cat is a tabby?

All tabby cats have the characteristic M on their forehead, also look for dark spots, swirls or stripes on the coat or banded hairs with the ticked (agouti) tabby.

Tabby is a coat pattern and has no direct impact on the cat’s temperament. If the tabby cat was raised in a loving home during early development, the chances are that he or she will grow up to be an affectionate cat.

Are all tabby cats female?

The tabby pattern can occur in both male and female cats; however, the patched tabby is almost always female, this pattern occurs when the cat carries both the orange and non-orange colours which are both expressed randomly.


The caliby cat is a patched (torbie) tabby and white, the white is due to the white spotting gene, and these cats are also almost exclusively white.

What is the lifespan of a tabby cat

The lifespan of most cats ranges from 9-15 years.

Can tabby cats be orange?

Yes, in fact all orange cats are tabbies.

What breed of cat is the orange tabby?

The most common orange tabby is the domestic shorthair or longhair, but several breeds can also be found in orange tabby which includes the Devon Rex, Cornish Rex, Munchkin, Scottish Fold, British Shorthair and Maine Coon.

Do Cats Sweat?
Travelling With Cats - Car or Plane
How Does Catnip Work & Why Do Cats Love It?
Cells of the Cat's Immune System